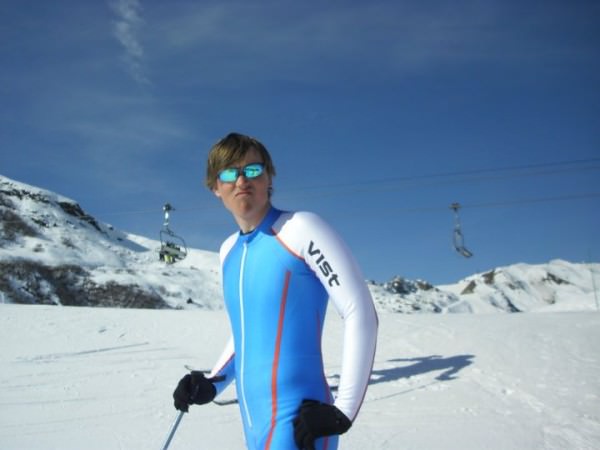 After finishing school Alex was busy working odd jobs and trying to figure out what he wanted to do with himself. He wasn’t sure if going to university would be the right move for him and given his love of skiing he decided to book onto the SnowSkool France course 2011 to train to become a ski instructor.

Alex arrived in France early in January and settled in to the SnowSkool chalet and mountain life very quickly! Out almost every day on the slopes working hard on his skiing and often in the evening too, working hard on his après, indeed he remains to this day the only SnowSkool student to make it into the top ten in the Lodge du Village’s top yard challenge… a fantastic achievement that he should hold almost as dearly as his ski instructor qualifications!

After just two weeks the big man from Bolton had passed his BASI level one exam, which would allow him to teach beginner - intermediate skiers in the future. He continued on with his training, gaining valuable work experience along the way with British Ski School – Parallel Lines. In his final week he took on the notoriously difficult BASI level 2 and passed with flying colours!

After the course he returned to Bolton where he spent the summer working and applying for jobs for the coming winter season. He contacted SnowSkool once more for some advice and help in applying to ski schools in Europe and further afield, they provided him with a number of job opportunities from their instructor recruitment database as well as some general application advice. To Alex’s credit he took all of this on board and has since found a job in the U.S.A at Wildcat resort, New Hampshire for the coming season! Congratulations!

We caught up with Alex to get his views on SnowSkool ski instructor courses:

I went to France 10/11 and had an awesome time! Nothing gets better than skiing, partying and living in the biggest ski area in the world! The best thing about it is that I have come away with a skiing qualification after training with some of the best and most qualified Instructors. Everyone on the course was awesome and at the end of it we were like family. Nick was our Rep and we couldn't ask for anyone better, a really good mate, anything we needed he was there. After the course he advised me with the best ways to get work and gave me some contacts to get in touch with so I didn't feel in the dark as soon as I had qualified. Over the summer I sent out as many e-mails out to ski schools in Europe and the USA and after a couple months passed by I had an offer come back from the States! This Winter I will be teaching in Wildcat, New Hampshire. You won't find anywhere better than Snowskool!