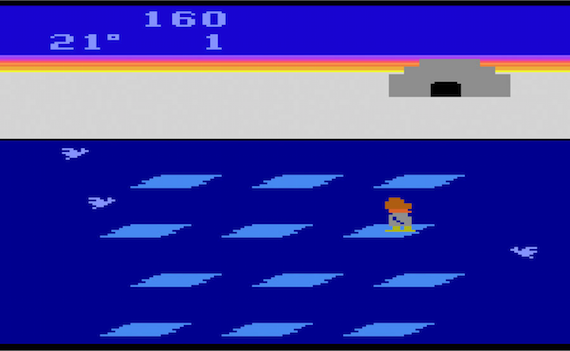 At Snowskool we love snow, obviously, and some of the team also have a penchant for videogames. And the fluffy white stuff is just around the corner! So we thought it’d be a good time to put together a list of our favourite Oldskool Snow levels, from before the year 2000. Here goes:

The Moustachioed Mario must appear in every best games list, and this article’s no exception ‘Cool, Cool Mountain’ from the N64’s at-the-time revolutionary Super Mario 64 was a complete blast.

There are a few great things about this level. First, the level’s based around a rewarding little plot where you, as Mario, must rescue a baby penguin from the top of the ice tower and deliver it back to its distressed mother at the bottom. Secondly, you can actually steal the baby penguin back and propel it into the abyss from the side of the mountain - with no penalty.

But the really great thing about this level, especially when the game was first released (there really was nothing like it at the time), is the slide sections, which took 3D platform gaming to another level of ice-based truth and joy.

Goldeneye. What a game. Easily distinguished from the duck of the same name and an absolute rite of passage for anyone growing up gaming in the 90s.

Many will remember Goldeneye for its multi-player mode – getting together with mates to play was an intense, almost spiritual experience. But the single player mode was also superb – somehow making the gamer feel like the newest of the James Bonds and bucking the trend of crap movie-to-game adaptions.

Surface 1, the fourth level, is one of the best in the game. It’s set in a secretive Siberian facility, where you, as the famous James, must use subterfuge and some of the best weaponry ever seen in a videogame (including the useless Klobb) to disable the zone’s surveillance equipment, kill the Russian guards, and capture secret information.

This level has a lot going for it: the open-ended map’s great, avoiding the snipers is fun, and there's loads of snow, but the really great thing about the mission is the lifelike atmosphere, which epitomises how the game flew in the face of the other shooting games at the time (e.g. Quake, Hexen 2) and dragged the genre out of the ridiculous.

The game spawned several sequels from Electronic Arts that almost-but-not-quite managed to capture the magic formula of the original - just like every James Bond since Sean Connery.

Donkey Kong Country was released in 1994 – and critically acclaimed for its groundbreaking use of silicon graphics technology. Snow Barrel Blast is the first stage of the game’s ice world and it’s probably the most fun you can have with apes and a mountain outside of an alcohol-assisted visit to the Rock of Gibraltar.

As you start the level, the sky is bright, then the snow begins to sprinkling softly, then the snow degenerates into a K2-class tempest where you have to almost squint to see the bees (BEES?) that buzz around in the blizzard trying to kill you. As the snow intensifies, so does the speed of the level’s legendary barrel-blasting sections.

The levels hard, sometimes frustrating, but it’s great because of the atmosphere that’s created with the transition in the section’s weather and music. It’s easy to forget you’re not a gorilla in a blizzard at some points.

In the 90s, Sonic or Mario used to as divisive a topic as Oasis vs. Blur, or Skiing vs. Snowboarding.

But, regardless of where you stood, Sonic was definitely faster than Mario: you couldn’t really get much faster than Sonic - unless you did something ridiculous like send him down the side of a mountain on a snowboard.

This is how the Ice Cap Zone starts! With a hedgehog on a snowboard! It’s much, much worse than it sounds but still absolutely amazing.

The sense of speed in the snowboarding sections, even though they’re short lived, is superb - taking the game’s trademark pace and pushing it to a place that’s almost as much fun as the real thing.

Now, admittedly, this one isn’t a snow level per se - the whole game’s a giant snow level where you just ski down a slope for as long as possible.

But, if there’s a ‘level ‘of SkiFree that Snowskool likes best it’s the ‘Abominable Snow Monster’ section that appears once the player exceeds the 2,000m mark.

At this point, a snow monster – a sort of snowman crossed with a serial killer – appears and attempts to catch and eat the skier.

There’s a bit of depth to the chase too. Further down the hill other monsters can appear and also give chase, but uphill - and although it’s difficult to escape, death isn’t certain as you can speed up your skiing to outrun the ravenous icemen - by pressing the F key to ski in the undocumented ‘Fast Mode’.

If you’re thinking of taking one of our ski instructor courses, then don’t worry! Snowskool can guarantee that 97% of our courses are generally free from snow monsters.

Today’s gamer can still enjoy the joys of SkiFree by downloading the game here.