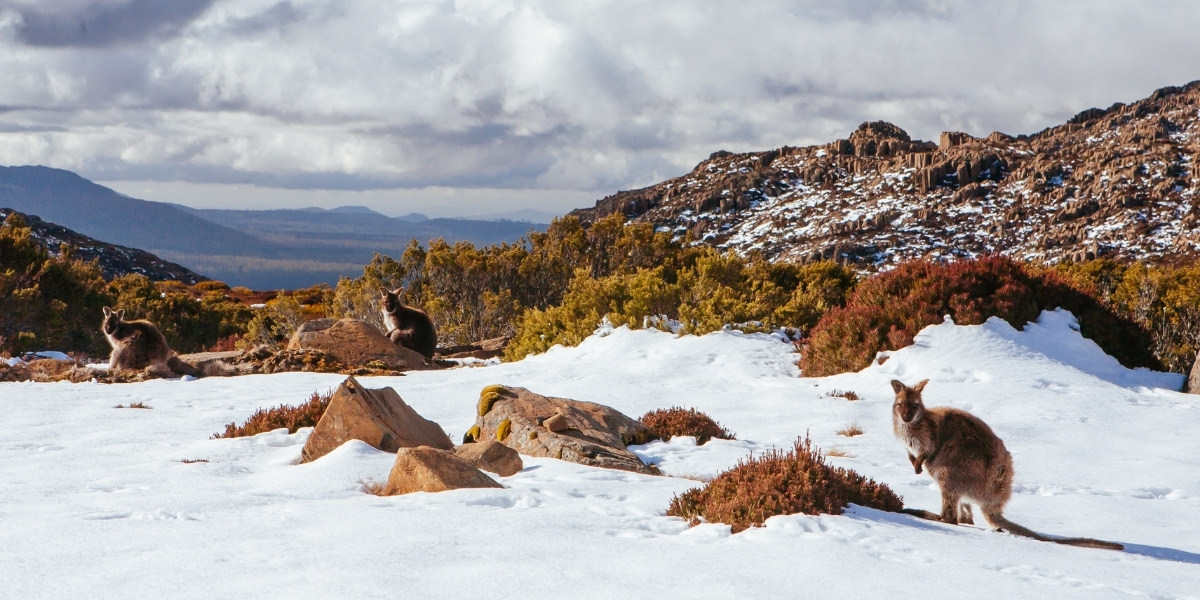 There are a few well-known places you can ski in the southern hemisphere: New Zealand, Australia, Argentina and Chile, for example. Yet, unbelievably, you can also ski in places like Lesotho and Ecuador!

On the South Island, you’ll find the three biggest ski areas Cardrona, Treble Cone and Coronet Peak with world-class ski schools, and training courses (oi oi!). They’re popular with Brits and Aussies because the accommodation is close to the ski fields, in towns like Wanaka and Queensland that have great food, and tonnes of fun activities, all at a fair price. In the North Island, you can ski at Mt Ruapehu (New Zealand's largest commercial ski field). New Zealand ski resorts offer really sick parks – Coronet Peak probably being the best. The snow and weather in NZ can be a little all over the place, but the volcanic landscape and the insane amount of outdoor fun to be had, make it our top southern-hemisphere ski destination. If you’re considering doing a ski instructor course in New Zealand, or becoming a snowboard instructor, get in touch to talk about our course in Cardrona. newzealand.com/uk/skiing

You can ski on either side of the New South Wales (NSW) and Victoria state boundary. In NSW, Perisher (the largest ski resort in Australia) has extensive snow-making facilities. Thredbo’s snow is also solid and the resort is renowned for its ski-in ski-out facilities and great après!

In Victoria, pretty Falls Creek is a pedestrians-only ski village, packed with off-ski (or board) activities. Falls Creek is linked to Mount Hotham where more experienced skiers and riders should head for the steep n deep! Finally, is Mount Buller where the Aus Winter Olympics team train. Buller has the most lifts of all the Victoria resorts, so you can be sure of a busy day. Most resorts in Australia have accommodation at the ski area, but not all of them have other facilities like shops, bars and restaurants, meaning you’ll have to make your own fun at home! While the resorts do get busy at weekends, with city-dwellers heading for the hills, the pricey lift tickets and expenses, has led a lot of Aussies to New Zealand for skiing. australia.com/en-gb/things-to-do

What Argentina lacks in high-tech lifts, it makes up for in scenery, lively Latin après and wine! Those steep n deep fans among you should consider Las Leñas in the north of Argentina. Buckets of snow makes it a freerider’s wonderland. In the south, the resorts of Cerro Catedral and Chapelco offer a bit more of a mix of terrain including lovely runs through the trees. You’ll rarely wait in lift queues in Argentina, and the value of a lift pass or steak and red wine combo is considerably cheaper than France! skiclub.co.uk/argentina

The main ski resorts in Chile are under two hours from Santiago, which makes their ski resorts quicker to get to (from the UK at least). Ski resorts in Chile share the dramatic views, low-tech and lively party-scene with Argentina. Chile has its very own Three Valleys (not to be confused with our fave French Three Valleys!), consisting of Valle Nevado, El Colorado and La Parva. The lift here service gentle slopes and great backcountry, but there isn’t loads for the intermediate skier or rider in between. The resort of Portillo is used for pro training and has more of a mix of intermediate terrain and technical steeps. Finally, further south, you’ll find the pretty, tree-lined resorts of Nevados de Chillan and Antillanca. chileanski.com

And now, for some less-expected resorts, where you can ski in the south…

There’s more skiing and riding to be done in South America! Chacaltaya Mountain, near La Paz, used to be the world’s highest ski resort, with a lift topping 5,200m. Tragically, the glacier underneath it melted and disappeared by 2009. There is still fun skiing and touring to be had, at super-high altitudes - Nevado Sajama for skiing and stunning touring in the Cordillera Real mountains.

With most of the country in the southern hemisphere, unbelievably, Ecuador makes our list! Winter sports in Ecuador happen on four volcanoes: Chimborazo, Cotopaxi, Cayambe and Antisana. There are no official ski resorts here, but for the adventurous (and experienced), it’s a playground! You’ll find mountain huts at 4,500m – 5,000m to enjoy touring and splitboarding between. If you’re going to do so, it’s a legal requirement to hire a guide. If you do reach the top of Chimborazo, its position near the equator means you’ll be the farthest point from the centre of the earth! (Yep, further than the summit of Everest!)

As with Ecuador, you won’t find ski resorts in Peru, but you will find lots of snowy mountains! For this reason, there’s lots of touring and splitboarding opportunities and you can even heli-ski at Pastoruri. However, the altitude combined with the technical terrain mean powder in Peru is only for pretty experienced freeriders and backcountry pros.

Yep, you can ski in Africa! Tiffindell and Matroosberg are its two, fully-functioning ski resorts. In Tiffendell you’ll find 2.4km of groomed slopes, snow machines, five lifts and a ski school. The resort also has a restaurant, ski shop/hire, conference centre and accommodation for over 150 guests. Matroosberg is a private nature reserve and ski area, but you can book to stay in quirky accommodation and even have your wedding there!

You’ll be surprised to learn that the Maluti Mountains, in the Kingdom of Lesotho, host a small-but-perfectly-formed ski resort. Afriski has four lifts that to take you up to 3,222m to enjoy groomed slopes and a fun snowpark. There’s food and drink at the resort; you can hire ski equipment and clothing too. Their clever ‘Learn to ski’ package includes: Lift pass, equipment rental, a 2-hour group lesson, 5 tubing runs, and 1 hour of bumboarding for only £49! A full day pass and equipment rental will cost you just £39 too.