So how old are you Jim!?

I turned 56 during the instructors course (SnowSkool Big White, 2016).

What motivated you to do an instructor course?

I started skiing at the age of 14 and have had at least one week’s skiing almost every year since. I completed my degree in architecture at the age of 24 and ever since then I had dreams of doing the instructors course but my professional career and family life (3 children) interfered with that plan.

When I turned 55, the last of my 3 children, Stephanie, finished her university degree and my professional work load finally started to diminish – largely due to my own desire to cut back on what has been a crazy professional career, the last 25 of which have been as a partner in my own architectural firm.

I also felt that my skiing abilities had plateaued and I wanted to push the boundaries to see how much I could improve, knowing that I would need to spend more than one week a year in order to do so.

Lastly, I have taught many people to ski informally over the years including my family and various friends and always thoroughly enjoyed analysing the technical aspects - and putting my own ideas of teaching into practice and seeing others improve.

Why did you choose Big White?

Firstly, Big White is renowned for consistent snowfalls and cold weather. Being further inland than Whistler, I knew that the quality of the snow also was better on average than most resorts. I particularly chose Big White for its convenience – ski in/ski out and the variation of its terrain with ample opportunity for off piste inbound skiing.

And being one of the largest resorts in Canada, I knew that I would not get bored during the 11-week program. 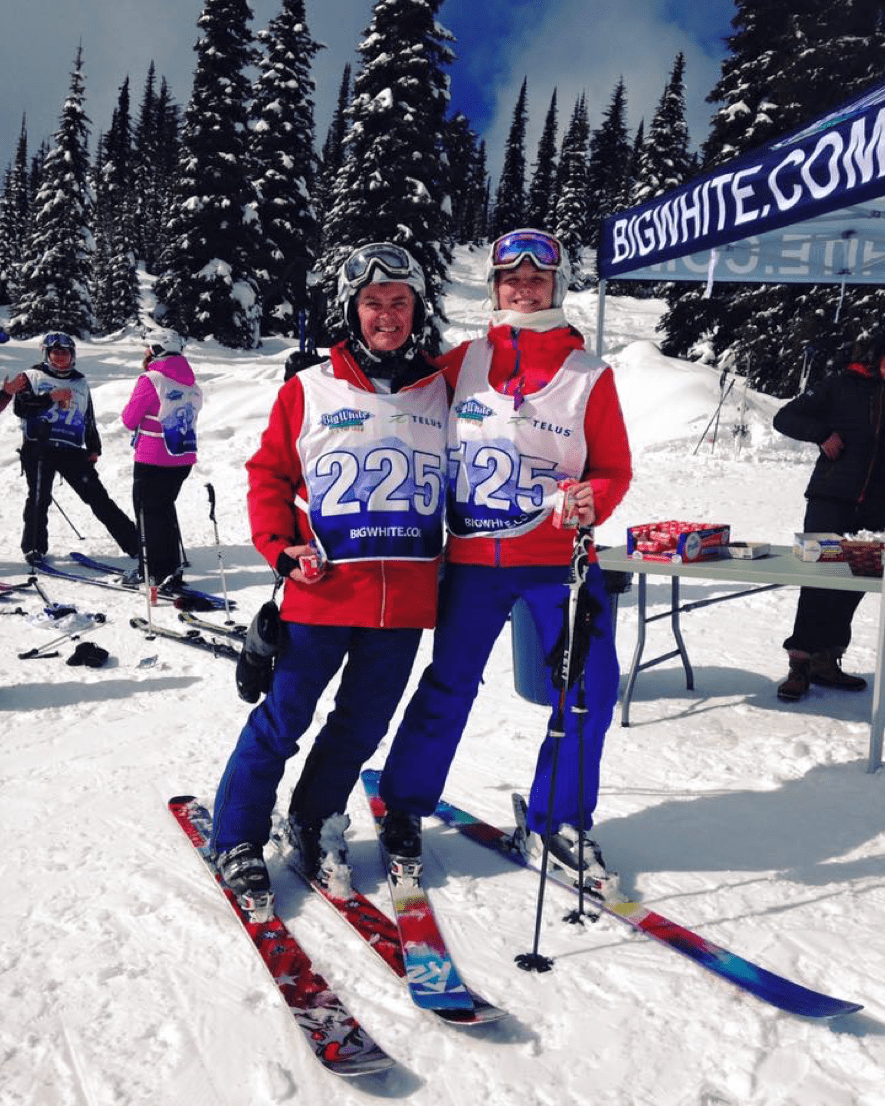 What was your fitness level when you joined the course?

I have always maintained a reasonable level of fitness and enjoyed many sports.

I often refer to my instructors’ course as my 3rd midlife crisis – the previous 2 being taking up surfing at the age of 45 and hockey at 47 (not having played since I was 21).

And how did you cope with the course and time on snow at your fitness level?

I surprised myself during the course and had only one day off skiing during the entire program (we went into Kelowna to see a movie).

At the beginning of the course most of the 20 something-year-olds I skied with looked at me with raised eyebrows but soon discovered that my skiing ability was as good as or better than theirs and, because I don't smoke or drink, I had better stamina. Of course, the first 2 weeks were a bit of a shock to the system with daily tuition but by about the 3rd week, I was in the swing of things and comfortable with my gear so could comfortably ski at least 6 hours a day.

There was only one other skier in our group of 15 or so who had more lift rides than me during the programme. He was a very dedicated guy from China but I can honestly say that I do not believe he ended up a better skier by the end!

What were the highlights of the course for you?

Of course, the sense of achievement in reaching Level 2 was a main highlight but, beyond that, the feeling of being totally comfortable on skis for the first time on all terrain and in most snow conditions was a real thrill.

Interestingly, it was only in the final 2 weeks of the program that I truly felt I had reached an instructor standard of skiing. I often described this sensation of improvement as a circle around the centre of balance which diminishes as time goes by - starting from the tip and tail of your skis until it is tightly bound around your feet by the end of the course.

I really enjoyed the challenge of tight tree skiing and the steeps, being comfortable in both of these situations now, it is easy to forget how intimidating both can be for an intermediate skier.

Have you used your qualification since finishing the course?

I have been a part-time instructor at Perisher Valley for the past 2 seasons. I was hoping to be full-time this year however my wife had to go to hospital for an operation on both feet and hence needed me at home.

Next year, Perisher has offered me a full-time position and the two of us will be working down there for the whole season.

How did you find getting work?

I was lucky enough to make friends with Josh Foster, one of the ski school directors at Big White, and he very kindly helped me make contact with the ski school at Perisher while I was doing the program - and in fact wrote me a great reference which almost guaranteed me a position, even before I had finished the course.

I believe the SnowSkool Big White course is highly regarded internationally and particularly in Australia. The tuition I received more than adequately prepared me for instructing at Perisher and certainly gave me the confidence to dive in headfirst when I started.

Having shadowed many lessons in Canada on the weekends during the programme, I knew what to expect and how I could teach as well or even better than my Canadian counterparts.

Do you have any future plans to work or gain further qualifications?

As mentioned above, I will be working full-time at Perisher next season and hope to continue this for the foreseeable future.

Next year, I will be going for my level III instructor qualifications at Perisher, really for my own benefit and also for the opportunity for teaching more advanced skiers on a regular basis rather than just occasionally.

Would you recommend this to others in a similar position in life, and if so why?

I think I am similar to many professionals who devote most of the younger years (pre-50) to their careers and raising a family – leaving their own priorities until a more appropriate time, later in life.

It was only in my 50s that I became more independent financially and comfortable having put my children through their education and sent them off on their own paths in life.

It is important to keep challenging yourself physically and mentally as you get older. A ski instructor course does both and it was fantastic to meet people from all around the world although most were young enough to be my children.

I have always felt that I have a youthful outlook on life (my brain tells me I am still 20!) Although I have had a knee reconstruction at the age of 33 and lost some of the cartilage of the meniscus in that knee, it is – touch wood – not giving me any problems and I certainly give it a good workout at the gym, on the tennis court, surfing etc. aside from skiing.

There are so many things I want to do in my life, this has been one of them and although I may retire from architecture in the not too distant future, I am hoping to remain active for many years to come.

Finally, I am a true believer that you should always challenge yourself and that those who do not age more quickly rather than relishing life and the world around us!

How to get a job as a ski or snowboard instructor after a course Previous Entry
How to Become a Mature Ski or Snowboard Instructor: FAQs Previous Entry