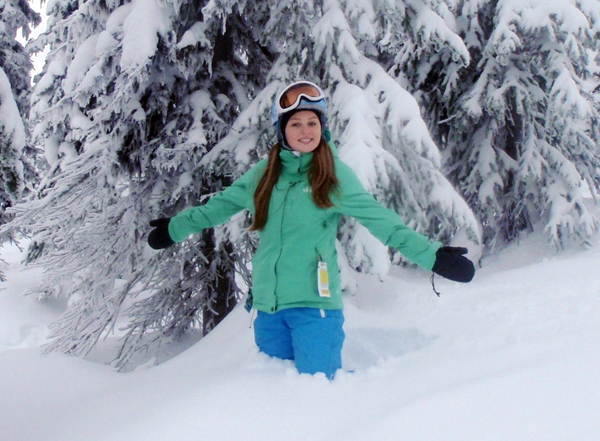 Wow!  What an amazing and exhausting start it has been!

Starting out in Sydney airport I managed to make my way all the way to Big White travelling internationally for the first time by myself!!  Arriving at five in the evening, I was greeted by a temperature of -20C, which was a big change from two days earlier when I was lying by the pool on a 30 degree afternoon in Oz!  Being dropped at the hostel, I met up with two other Sydney SnowSkoolers who were in my room and after a quick dinner, we fell asleep straight away because we were really tired after our long flights.
The next two days we spent adjusting to the freezing temperatures of Canada’s traditional January cold snap, organising our lift tickets and familiarising ourselves with the village before we were able to access our apartments. Once in my apartment I met up with the other Aussies in my condo and we were soon joined by our two English roommates.  We spent the first couple of days buying new ski gear and finding our way around the mountain. We were also introduced to Dunk and George, our in resort reps from SnowSkool, as well as to Phil, the boss man!  Many of us went down to explore Kelowna while the rest of the group got their skiing legs ready for the hard first week of training.  We spent a lot of time comparing accents in our apartment, especially how the British say ‘hot tub’ (our ‘spa’) and like to use the word ‘well’ as a substitute for ‘really’.  I was well surprised!
First day on the slopes we were put in random groups and went for a ski with our new instructors. My group quickly became used to each other and our instructor, a guy called Jason, managed to make everyone laugh when he sang songs we’d never heard of! The first day we spent mainly getting used to skiing again and started to learn about improving stance and balance.
The powder arrived on Day 2 and every minute was spent in the trees learning how to ski when you can’t even see your feet! Most of us had a few falls and we all laughed our way through the day. By the end of it though we were all absolutely exhausted, and the same again on Wednesday, when we really started to focus on drills to fix all those bad habits.  In Jason’s words, we needed to get skiing – less like us and more like him!  That was also the coldest day so far and with temperatures dropping below -24C, more than one of us got to experience some mild frostbite on our toes!
Thursday brought white-out low visibility at Big White.  On the second run of the day a guy in my group, Brett, had a huge fall and had to be carted off by the ski patrol.  Luckily what was thought to be a broken leg turned out to be a torn calf muscle and he should be up to ski with us again in a few weeks. For a guy who expected to be out for the rest of the program, Brett was in great spirits cracking jokes to the ski patrollers. The class sure was a lot quieter without him for the rest of the day!  That afternoon we managed to get some videoing done of our skiing.  It was great as we were able to see our bad habits first hand, which made it much easier to fix the next day.
Friday was a really good day because we really were able to see how much we’d improved in just one week.  We had one-on-one talks with our instructors after a day of practising our short turns and applying them to the moguls. It was also my roommate Elli’s birthday, so George organised for everyone to go tubing on Big White’s mega snow-coaster!  After losing a few tubes down into the trees and a lot of laughing, everyone agreed to go back and tube again soon.
I can’t believe we are already a week into the course. Everyone has been so nice and I’m really enjoying skiing with a new group of people. Although I am absolutely exhausted from going at it so hard each day, I have already had so much fun and am looking forward to every single day of the next 10 weeks.
Until next week,
Emily Jackson
SnowSkool / Interschools Scholarship Winner for 2012
Click here to find out more about SnowSkool's instructor training courses