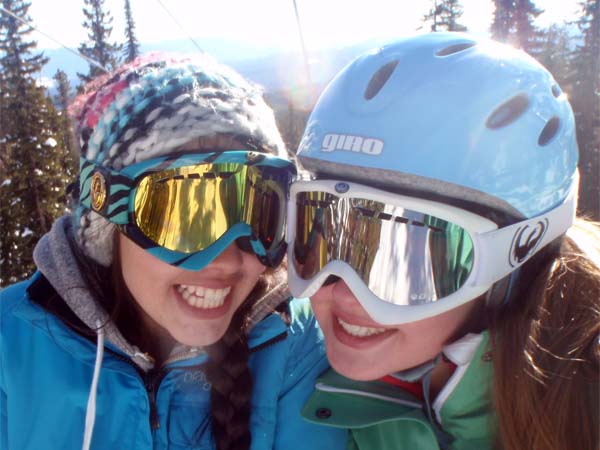 Last weekend brought more of the same blue skies as last week and while some of us chose to rest our legs after 3 weeks of hard skiing, most couldn’t resist the sun and had to get out for a few runs. On Sunday afternoon it was the Super Bowl, and although the majority had no idea about American football, we all gathered to watch at least some of the game at Sam’s – it took over 3 hours to play only 60 minutes of football!

Monday brought the beginning of our fourth week and as usual it was time for another instructor. This week my group had Jamie, our first Level 4 instructor. For the first two days of the week, the village was invaded by company tents filled with skis for demo week and trying to ski through the main square became a bit of a challenge!  On Monday afternoon my group had its 3rd injury when Lucy (from near Hotham) was taken out by a snowboarder and had to head down to Kelowna for neck and back x-rays. Luckily she wasn’t seriously hurt - just badly bruised - but we’re starting to think our group might be jinxed.

Wednesday we were lucky enough to get a bit of much needed fresh snow, which not only covered up a few of those rocks but also gave us a chance to practice teaching each other in different snow conditions. Now our skiing has greatly improved we now need to work on our instructing skills. Jamie was great in giving us lots of opportunities to teach different skills to each other and gave us a lot of feedback to help us improve. We’re now getting a lot better at picking out problems in skiers and thinking of drills to fix them.

Thursday was again video day and we were filmed performing our intermediate parallel turns. Then it was a group lunch at the Bullwheel where we watched the video on the TV and had to pick out our own faults. We’ve almost all fixed the common problem last week of balancing on our inside ski and now I just need to work on taking time through the turn and not switching from edge to edge. It was also Holly’s 18th birthday so a few of us headed out to dinner to celebrate.

Friday was our last day of lessons before our Level 1 exam and although we wanted to practice our teaching and perfect our skiing, low lying cloud rolled in and with visibility so poor, skiing became a bit of a struggle. Everyone called it a day early and headed into the Bullwheel to catch up with each other. Most of us then took at least one day of the weekend off, resting and studying for the upcoming exams.

The pic is of me and a friend who visited this week from Australia.

Another great week preparing for exams which start on Monday! Hopefully the news will be good for everyone next Thursday!

Hopefully next time we talk, I'm a qualified ski instructor!