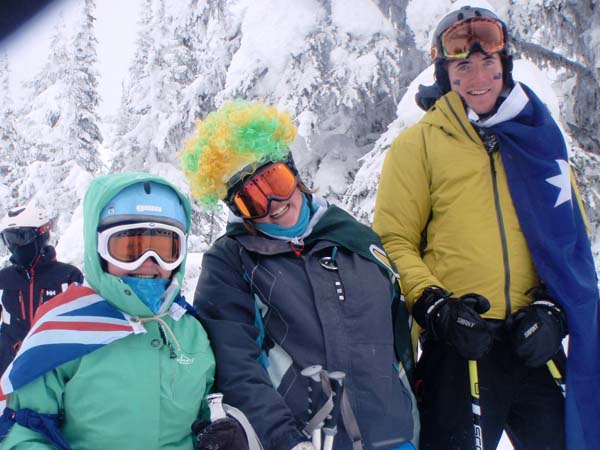 Week 2 in Big White started out with an end-of-January cold snap and temperatures dropped to a bearable  -6C. After an exhausting first week most of us spent last weekend resting up and only managed a few hours skiing but a whole lot of time in the hot tub! On Sunday I went down to Kelowna with a few others to get a new pair of skis as the twin tips I was using would have made passing Level 2 very difficult.  While we were there we also managed a quick trip to Walmart – the only place I've seen where one can buy furniture, guns and groceries, and grab a Maccas on the way through!

When our second week of training started on Monday, we stayed with the same group of students but under the guidance of a new instructor.  This week I had Blake, who had a very different teaching technique to Jason.  We spent much less time talking and a lot more skiing fast and far!  Monday and Tuesday both started out with blue bird skies and ended up with almost no visibility in the afternoons, but we managed to get some good pictures and even saw Silver Star from the top of Big White! Tuesday afternoon was spent in the trees, hiding from the cold, with white fog that froze on the outside of everyone’s goggles and for some of us young Aussies, stressing about Uni applications.
Wednesday was another gorgeous clear day with unlimited visibility all around the mountain! Although we hadn’t done nearly as many drills as in the first week, everyone’s skiing had already improved simply due to the challenging terrain we were skiing. This was also the first day of skiing the cliff bowl for us, the double black diamond area of Big White, where there was a tonne of powder due to wind loading.  We all faced our fears and conquered the near-vertical drop that is The Cliff. I also managed to get some great pictures when Tom straddled a tree with his skis and got himself tangled up between the branches and the deep snow!
Thursday was Australia Day which happens to be one of the biggest days of the year here! The majority of us Aussies dressed up wearing flags as capes and tattoos on our faces. Some of the more hard core people managed to do a few runs in board shorts or a bikini but in -10C with zero visibility, I wasn’t that game! This was also the day of being videoed again so after capturing ourselves in action with our flags waving behind us, we headed to The Deli to analyse our skiing. Although it looks as though I’ve fixed the issue of not fully balancing on my edges at the end of my turns, I now need to work on not putting so much weight on my inside ski. Even though it was Aussie Day, we we’re all utterly exhausted – we postponed our celebrations to Friday and everyone had an early night.
Friday was another classic big white weather day, with blue skies in the morning and clouds rolling in as the day went on. We headed back to The Cliff in the morning to watch from the chairlift on the way up as ski patrol did some avalanche control explosions, while on the way down, we skied some good powder. We also spent a lot of time working on our individual challenges from the previous day’s video– for me that meant concentrating on keeping my weight on that outside ski! In the afternoon we took off our skis and hiked to the peak of Big White mountain to see the full and amazing 360 degree views ranging from Silverstar to mountains in Washington state in the US of A. Afterwards, we skied all along the ridge line of The Cliff Bowl and came down through completely untracked powder as deep as our knees. The week was finished off with an awesome burger night at Lucy’s apartment (Lucy’s another Interschooler from near Mt Hotham in Victoria) and a party in Danny and Chris’s apartment, where I had the chance to talk to a lot of other SnowSkoolers I hadn’t yet met.
This week flew by so quickly again and I can’t believe we’re already halfway to our Level 1exams!  Can’t wait to start Week 3 and see what it has in store.
Until next week,
Emily Jackson
If you'd like to find out more about SnowSkool or Interschools, try these links:
SnowSkool instructor training courses