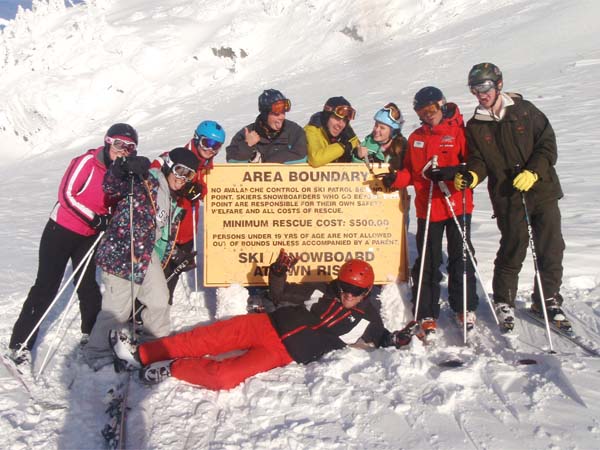 Week 3 brought blue bird skies, new instructors, our first teaching experiences and - once again - a whole lot of fun! The weekend weather was fairly average, with visibility on Sunday being the worst so far.  Many of us took the opportunity to rest our legs and have a day or two off from the skis. This meant some of us headed down to Kelowna and experienced Costco for the first time, and others stayed in and caught up on some much needed sleep!

Monday saw blue skies and clear visibility which continued right on through Tuesday. This week my group had Paul as our instructor who took us through the steps on teaching beginners, the fast track to parallel. By the end of the week we could all recite the steps – mobility, sliding, stopping, turning and linking!  On Tuesday we spent sometime practicing these steps ourselves down at the magic carpet in Happy Valley which meant we also took turns teaching each other and pretending we were five year old beginners!

On Wednesday the snow started to come down and didn’t stop all day which meant heading into the trees to cruise the powder! Once again Luke managed to bury himself into the snow and came out looking much whiter than everyone else. We again spent some time at Happy Valley to experience teaching in different snow conditions – fresh powder compared to a compact groomed slope. After a day of fresh tracks lots of us headed out to Sam’s for dinner to try out their famous wings – 35 cents per wing and they did live up to our expectations.
The rest of the week we had cloudless blue skies and unlimited visibility – perfect for taking photos! Thursday was definitely one of the best days yet, filming in the morning and the afternoon spent over at Gem Lake. The Fourth Ace, Mustang Sally and the double black Playground were definite highlights which included dodging trees and jumping off a few drops! Filming is becoming the fastest way to fix any of our bad habits and we are also starting to be able to pick out what’s not right in our own skiing. This week I need to start flexing my ankles more on my left turns. We also got to do our group’s favourite run a few times – Blue Sapphire – which involves tucking and straight-lining the last steep pitch and checking our speeds on our iPhone app, Ski Tracks, which almost everyone here has!
Friday was our last day with Paul and another day of amazing views. We moved our teaching of fast track to parallel off the magic carpet and onto Serwa’s, another green run on the mountain. Snow plough turns are definitely harder than they look to get right! We also learnt how much you have to exaggerate all your movements to make it much easier for students to copy. After a few tree runs in the afternoon we headed in early for our weekly feedback from the instructor as almost everyone’s legs were giving up on them! The afternoon was spent down at the ice skating centre where we attempted to put on an ice hockey tournament. After a few games though it became clear who hadn’t played hockey before and who had and we instead just turned to normal ice skating.
And that was Week 3! Only one more week until we sit our Level one exams and time is just flying by! Time to start studying the manual to learn all the tricks so we hopefully all pass the course!
Until next week,
Emily Jackson
SnowSkool Interschools' scholarship winner
Nee to know more???
SnowSkool instructor training