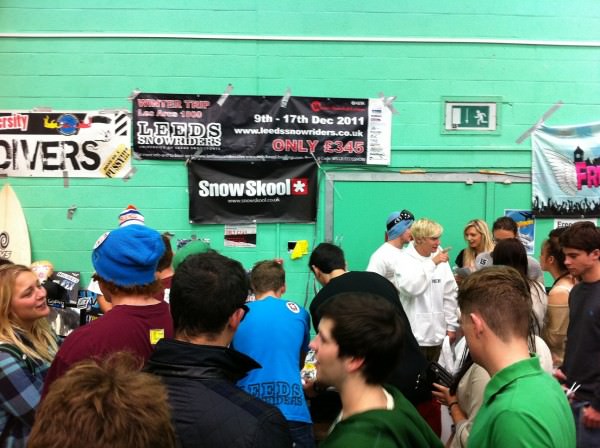 We kicked off our tour with a trip up to Birmigham university to catch up with the guys at Brumski, things were busy up in the midlands, the first day of fresher's week is always a big one! The campus was awash with fresh faced youngsters and of course some not so fresh faces too, which is perfectly understandable given the new found joys of cheap student drinking and university halls... We caught up with club president Steve Heath, who very kindly took time out from his busy schedule of supplying fresher's with cans of Relentless to meet us. Things are shaping up nicely for Brumski this year, they even had a real snow rail jam planned for the Wednesday  of fresher's fair, it looked awesome and we were gutted to miss it but the next leg of our adventure was calling! So with a crate of Relentless safely stashed in the back of the SnowSkool Passion Wagon (cheers Steve!) we hit the road once more.

After another few hours on the road we arrived safely in Scouse land, we found a safe underground car park (you can never be too careful - joke!) and headed over to meet the guys from Liverpool John Moores University in the finest meeting venue in the land... Vodka Revolution. Well it was fresher's week after all! With the guys from LJMU well supplied with a couple of pints (a coffee for us) we chatted all things SnowSkool and LJMU, Rob and the rest of the guys are a great bunch and have some exciting things planned for the coming season - definitely one to watch! Then it was a short hop over to the other side of Liverpool to catch up with the guys and girls from Liverpool Snowriders. A surly bar lady couldn't put us off as we enjoyed a well-earned beer with Roni and the rest of the crew and supplied them with lots of shiny new SnowSkool merchandise! We're predicting big things from Liverpool this year, with an awesome holiday lined up and a great committee behind the club we're sure their member numbers are going to skyrocket!

From Liverpool we headed straight over to Manchester to grab ourselves some shut-eye before a big day at SKUM (University of Manchester) fresher's fair.

On Tuesday morning we arrived at a very busy Manchester students union. Upstairs we found an absolutely rammed sports and activities fair with the SKUM committee in prime position - already with a substantial crowd of willing freshers around them. We were welcomed with open arms, unfortunately we couldn't return the favour as we had a massive box of merchandise in our hands but once it was in the backroom there were hugs all round. Equipped with SnowSkool t-shirts and bandanas the SKUM committee were back to work but not before insisting we had a shot of their famous Skittles Vodka, it was only 10:30! Suffice to say SKUM like to party, but at the same time they're one of the most welcoming clubs around always happy to chat to fresher's and throwing all sorts of freebies their way. We hung around at fresher's fair most of the day, plugging our NEW COMPETITION (we're at it again...) and helping the kids sign up to SKUM. Once the crowds began to die down in the late afternoon we skated (preffered method of transport) down to Manchester Met to meet up with John and Tish from the MMUFS committee, who were midway through preparing for their fresher's fair the following day... things were getting a bit tricky with a printer taking 3 hours to print a poster so it was good to take them to the bar for a brief relax and a chat about the club. They're potentially teaming up with Leeds Met on a holiday this year so fingers crossed for that... it'll be a big one for sure!

So after our Manchester leg of the tour we jumped back in the van and headed over to Sheffield for a quick meeting with Harry and the rest of the SHU Snow crew. They were busy planning an all nighter to get everything ready for their fresher's fair so we were more than happy to provide them with some extra merchandise to stick in the fresher's packs. Harry is an ex-snowskooler himself so it was good to have a bit of a re-union with him. We caught up with SHU's plans for the coming season and we're stoked to be working with them this year. By now it was getting late so we jumped in the van and headed up to Leeds, we were planning on taking it easy, but when in Rome... so it was off out in my old stomping ground with the Leeds committee, after who knows how many long island ice teas it was time to call it a night in time for the Leeds fresher's fair the following morning.

We spent the day throwing out free T-shirts, telling people about that awesome competition we have running... and playing with the Leeds Committee, which included riding a giant wooden horse and shouting at unsuspecting freshers, all in all a good day's work! As usual Leeds are rocking it this year, with some great new merchandise, a ridiculously cheap holiday, and their first social where they're giving away 50 litres of vodka cocktail! Ridiculous.

The final leg of our tour saw us head back down the M1 calling in at Sheffield to chat with Jenn and Emily from the snowboard club, we were feeling a little fragile from the night before but nothing a cheeky coffee couldn't sort out. We chatted all things SUSC and we're getting particularly excited about the Sheffield Freeze - a charity dryslope competition run in conjunction with SHU, SKUM, and SUSC... Which of course we'll be heading up to! Then it was off down to Nottingham to meet up with Rich from NUsnow, deliver some merchandise in time for fresher's fair next week, and just have a general catch up. Nottingham are a massive club and we're very excited to be sponsoring them this year.

After that it was time to head back south. With the first leg of fresher's tour complete we were absolutely shattered, but fortunately a weekend of rest has fixed that! This week we're heading out to see Southampton (SUSSC) and Surrey Snowsports... with a lot less driving involved things should be a bit less hectic... but hopefully just as FUN!