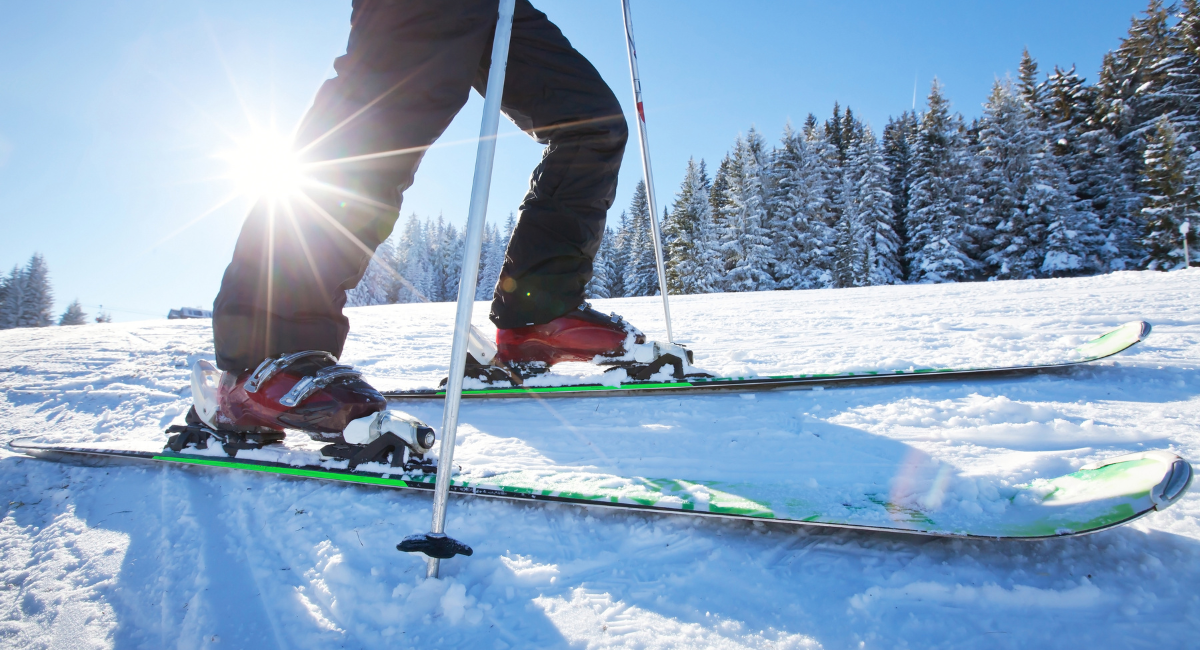 When you head to the ski shop - to rent or buy skis or boots - there’s a lot of jargon thrown around.

“Dins, bindings, breaks, stiffness and even mondopoint” - but what does it actually all mean? Boots and bindings specifically, are shrouded in odd terminology that no one really ever explains to you. However, some of these things are actually pretty important to understand - for safety mainly. We’re here to answer the questions you’re too awkward to ask.

What does “dins” mean?

You’ll hear “dins” all the time in the ski shop as it’s somethings that’s adjusted for every skier. You might know that it relates to how tight your bindings clench your boots, but not much more. Well ‘DIN’ actually stands for Deutsches Institut für Normung (from the German Institute for Standardisation)! Now that’s a killer pub quiz question. DIN settings are associated with how much force it will take to release your foot from the binding in a crash. It’s based on your skiing ability, your weight and height, and the boots you are wearing. If you are charging down a slalom run, you’re DIN settings will be higher than if you’re cruising the blues on a sunny Sunday. The point of self-releasing bindings is to save your knees/ankles/hips in an emergency, but you don’t want them so loose that they ping off if you hit a quick turn. Pro ski fitters will be able to find the perfect balance for you. 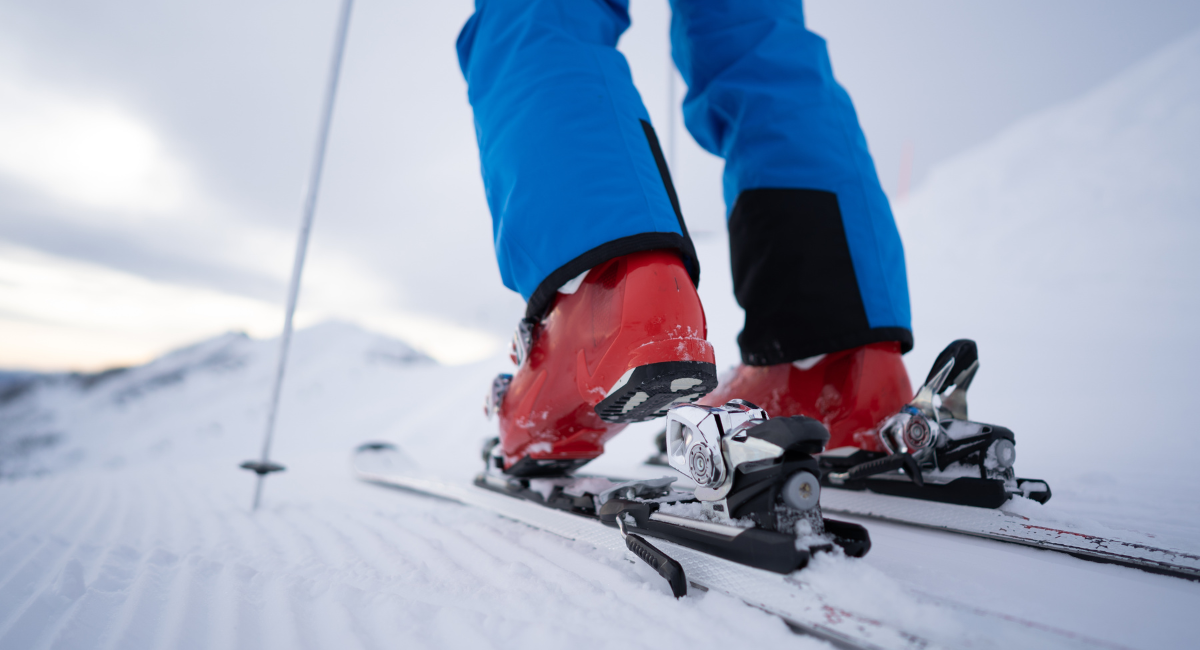 Do ski bindings have brakes?!

You might not have spent much time thinking about the ‘brakes’ on your ski bindings, or ever really considered how they work or what they’re for. The brakes sit along side your boots (one on each side). The clever thing about ski binding brakes is that they lift up when you clip your boots in (imagine a bicycle stand automatically flipping up)… and they extend downwards when your boots come out of the bindings. The logic here is that if your boots have come out of the bindings - there’s a chance it wasn’t on purpose! The brakes (which are effectively just metal sticks with a plastic coating) then drag in the snow and stop your ski flying down the hill.

What’s the difference between alpine, downhill and touring bindings?

There’s a bit of a trick question here - ‘Alpine’ and ‘downhill’ skiing are the same thing. It’s the popular holiday skiing that you mostly see in ski resorts. The bindings for this kind of skiing are what we’ve described so far. They’re usually screwed into the ski and hold you ski boot firmly in place to help you ski down hills. Touring bindings have to allow you to both ski downhill and tour (also known as skinning) uphill. The crucial thing here is that touring bindings allow your heel to be free when you’re on the ascent. When you want to head downhill, touring bindings allow you to secure your heel - it’s often a pin system rather than the clips of downhill bindings.

How do ski techs know where to position bindings on the ski?

Did you know you can adjust the position of your bindings on your skis? Bindings will be mounted in a certain position for a reason, some bindings even have a slight sliding feature so you can move your position on the ski even after the binding has been screwed down. Mounting bindings slightly behind the centre gives a more stable but less responsive feel to the ski. You’ll see beginner skiers mounted further back. However, it also gives you more float and control in powder so freeriders and powder-junkies will be back there too. Slightly in front of centre and you’ll feel a quicker turn response and speedier ride. Of course, for a bit of both, you can sit your bindings in the middle of the ski. Most ski manufacturers will add some lines on the ski to indicate where the recommended positions are.

What sort of things make it hard to clip in to my bindings?

If you have a real struggle to clip in to your bindings, it could be that your DINs are set a bit too high for your weight. On the other hand, if you feel loose in your bindings or your skis pop off often and unexpectedly - your settings could be too low. One other thing to think about is how much walking (or après table dancing) you’ve done in your boots. If the heel and/or toe gets worn down, the crucial ledge that your bindings clip onto could be getting worn down.

It’s pretty simple to keep your bindings happy - so do it because they’re kind of essential when it comes to connecting you to your skis. Just keep dirt; don’t leave them wet for too long; and store them somewhere warm and dry. Be extra careful if you’ve been walking through areas where they’ve salted icy roads and then you’ve clipped in to your skis- the salt and grit could be damaging to the bindings. One final thing - don’t worry about cleaning bindings with anything soapy or bleachy. When bindings are mounted in the workshop, they’ll often add in some lubricants that help the mechanism work. Soaps or solvents would wash these off. 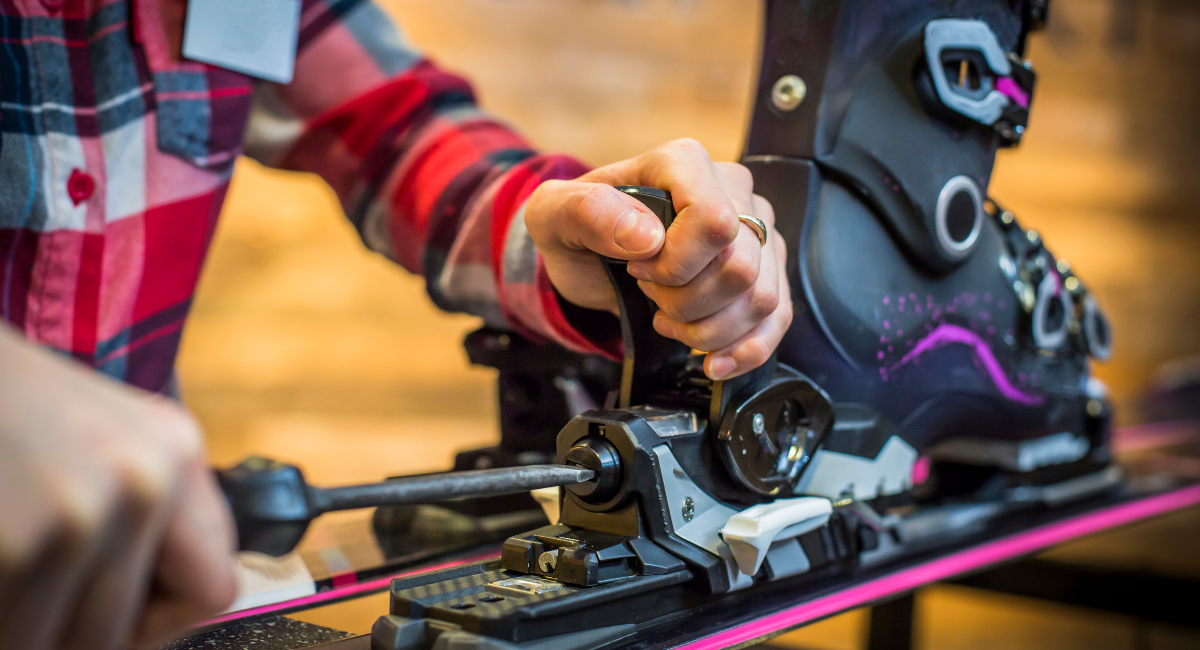 And boots - anything to add there?

There’s a couple of ski boot head-scratchers that we should also cover. All ski boots have a flex value somewhere between 60 and 140. However, the higher the number, the less flex the boot has - go figure! Really, the flex value relates to stiffness. In some respects, a heavier, stronger, more skilled skier will want a boot with less flex so that the have more control. That said, anyone shredding in the park will actually want a softer boot - to absorb shock on landing. Ski racers will also go for maximum stiffness to power through turns.

Ski boots are measured in mondopoint

A final fantastic fact, did you know ski boots aren’t measured in shoe sizes, they’re measured in ‘mondopoint’?! Quite simply, it’s the length of your foot in centimetres. To calculate this, stand on a piece of paper with your heels against a wall and bend your knees slightly (you’ll see your toes extend forwards a tiny bit). Mark the paper at the end of your big toe and measure the distance back to the wall.

Is the ski boot liner part of the boot?

Our final piece of wisdom to impart is that, *most of the time*, the fabric liner of a ski boot isn’t actually attached. It’s quite solid, but give that thing a yank and whip it out into the fresh air! It’s important to keep your boot liners dry - this will help keep things hygienic and less smelly, hurrah!