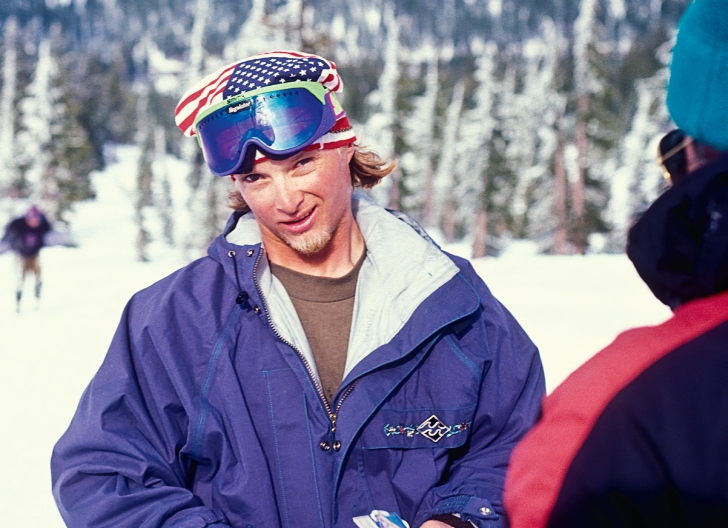 You could probably consider Noah the Shaun White of his day. Formerly a pro skater of both vert and street, Noah’s transition to professional snowboarding in his early 20s was seamless. Not satisfied with hard boots and tight neon culture that pervaded in early snowboarding, Noah brought his own unique skate style to the mountains. With his first snowboard part coming in the skateboard film “Hokus Pokus” (Mike “Mack Dawg” McEntire) Noah laid down the foundations for freestyle snowboarding as we know it today. His future work with Mack Dawg would become instrumental in shaping snowboard films and indeed the industry as a whole. Many of today’s top pros will always cite Salasnek as a major influence in their riding styles, in particular JP Walker who was first inspired by Salasnek’s bit part in the early snowboard movie ‘critical condition’.

Initially Noah rode for lesser known brand ‘H-Street snowboards’ but was left in doubt as to his professional future after the unfortunate death of one of the brand’s owners. Fortunately for Noah he subsequently ran into Tom Sims at an early tradeshow and was signed to the Sims Snowboards brand. It was here that his most iconic pro model was spawned and is still one of the most recognisable pro models to date.

Noah continued to be a main feature of professional snowboarding throughout the 90s with standout parts in Standard Films’ Totally Board (TB) series. These films combined sick riding with massive soundtracks and once again shaped the face of the snowboard film industry for years to come.

While in the early years of his pro career it was his freestyle snowboarding that really broke the mould, Noah Salasnek very much came into his own when he began taking these skills to the steep and deep terrain of Alaska. Paving the way for the big mountain riders of today, Noah’s skills in the backcountry and his knowledge of the mountain still stand out to this day. He successfully made the transition from competitive pipe rider to big mountain pro.

Eventually though he began to tire of the extra commitments that came with being a pro snowboarder, he wanted to break away from Sims to start a new project with Peter Line and Mack Dawg, a little project called Forum… (You might’ve heard of it).

Unfortunately due to contractual commitments Salasnek was unable to leave Sims snowboards and signed on for another 2 years only to be dropped from the team at the end of the contract, something that left a sour taste to say the least.

Despite all this it is the snowboarding that mattered most to Salasnek, not the professional contracts, the competitions, or the money, just snowboarding.