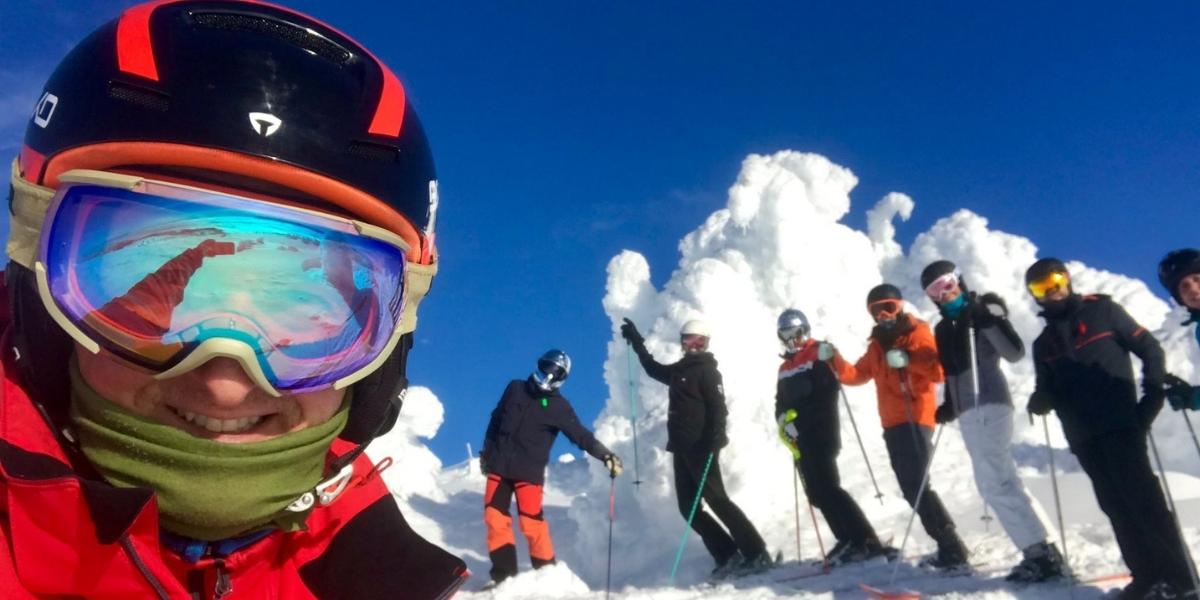 Welcome to the first course diary, for SnowSkool Big White 2022! We’ve finally arrived; the build-up to this season’s course has been huge! The gang in Big White this year are an amazing crew and this first week and a bit has been all about getting to know each other and making the most of their new home for the season.

✏️ Temperatures in British Columbia were intimidatingly low in the week before SnowSkool arrived. Luckily, they eased off and we were treated to a gentle -5. Just about everyone arrived on the 4th and were allocated rooms in apartments across the resort. The accommodation varies a fair bit – some are slap bang in the middle of the village, and those further out benefit from hot tubs and pool tables… going to be a tough old season!

✏️ To get things going, everyone met up with their trainers and was given a manual for the CASI or CSIA course. One SnowSkooler who didn’t quite get going was Cameron, as he arrived with a positive COVID test and spent the first five days of his course in quarantine…

✏️ Fashionably late, Cameron was able to re-join the crew and got fully stuck in, slamming a rock after a jump. Cue broken ribs and Cameron timing out again! Word has it Jean-Luc also flung himself off a balcony into an irresistible pile of fluffy snow… good to know the self-preservation factor is high this year! Jean-Luc definitely has the Gods looking down on him – later in the week he lost his phone while on a snack break. but it showed up under a chairlift THREE DAYS LATER!

✏️ Everyone is staying well-fed, with a mixture of group meals around town, takeaway meals and home-cooking. Rib Monday at The Bullwheel was a highlight; half price for a full rack of ribs had everyone enjoying a doggy-bag of ribs for the next day. Takeaway pizzas were also on offer this week – quite a sight to witness the gang skiing home, pizza boxes in hand!

✏️ As it got warmer, some rain fell and put everyone’s legs to the test in icy conditions mid-week. SnowSkool course leader Holly joined one of the snowboarder groups, to check out what they were up to (very generous of them to let a filthy skier tag along!). At this point, lessons are mostly about getting everyone up to the same standard, ahead of actual instructor training which begins soon.

✏️ The gang made time for plenty of off-snow activities too. Georgie C, Hannah, Tom. G, James and Sean caught a Kelowna Rockets ice hockey game and then gave the ice a go themselves at the Big White rink. Georgie came home with a black eye that a hockey player would have been proud of.

✏️ On Friday, we celebrated the end of a mega week one, AND Jack, Joel and Tom’s birthdays! This consisted of a pizza party at the Powder Ridge accommodation.