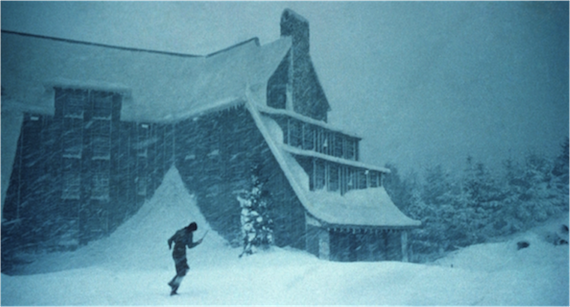 Snow. It’s a substance for skiing on but it’s also a great movie additive. So, as part of our celebration of all things snow, here’s a quick roundup of Snowskool’s favourite movies featuring the white stuff – in chronological order.

What’s the ingredient that makes this one of the best Bond movies? Is it the Union Jack parachute that heroically unfurls as Roger Moore skis off a cliff-face to evade the pursuing commies - or is it really the banana yellow ski suit he’s clad in? Who knows. But banana yellow all-in-ones are making a comeback in 2015. You mark our words.

It’s snowing. Furiously. And this means you should at least sleep on the offer of a janitorship at a huge, isolated hotel with no guests left in it. Why? Watch Stanley Kubrick’s psychological masterpiece to find out more.

Powdery pure, it may have looked, but the Antarctic snow in this cult classic wasn’t suitable to snowboard on. Why? Because underneath lurked the film’s namesake, The Thing: a vile, murderous, shape-shifting extra terrestrial that took the form of its victims to get more victims.

If your ski instructor develops a distant look in his eye after going out in the snow alone it might be best to stop for the day and head back to the ski chalet.

The ‘Top Gun of the Slopes’ has it all: off-piste skiing, women troubles, job troubles, drugs, crumbling relationships, Martin Kemp muttering in a fake German accent. That’s at least one up on most Academy Award winners - but this happens to be one those films that’s so bad it’s brilliant.

Made in Scandinavia - so this vampire film isn’t your typical trash. It’s an austerely beautiful creation that reveals itself gradually, like the best pieces of IKEA furniture do. And, as it’s set in freezing-cold Swedish suburbia, it’s also got more snow than you can shake a stake at.

007 clings to his snowmobile on the side of a glacier. Gustav, the film's villain, demonstrates the power of his sun laser by melting the glacier. A huge shard of ice collapses into the sea with 007 on it, generating a tidal wave in the process. ‘Global warming, it’s a terrible thing’ says Gustav, suavely.

Classic Bond so far. But what happens next is unusual: 007 survives the ensuing tsunami by using parts of his broken snowmobile to kitesurf to safety.

The CGI seems to have been rendered by a Phillips CD-I.