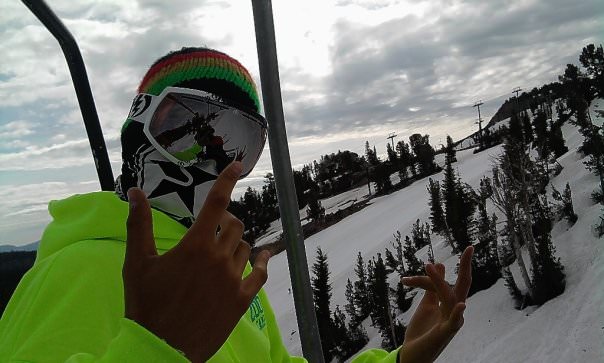 When I was 10 years old my brother and I started skateboarding. Now, at the age of 32, my current board is gathering dust in my bedroom, but it's still there. Just. And as a result of those intervening years, my mate laughs, sorry, mocks, when I say the words 'sick', 'dope', or 'sweet'. But I can't help it, and then I feel like a wannabe. So it was with arched eyebrows that I read through the 'Snowboarding Dictionary: Snowboard Definitions, Language, Terms and Slang' which I had just stumbled across
within the abc-of-snowboarding.com website.

I'm wary of these kinds of lists. Language has always been an essential part of a cultural group's identity - part of its purpose is to keep outsiders, well, out. So to provide people with a direct insight into a group they might not understand is full of shortcomings. How can it be possible to understand the language, when you don't understand the culture that uses that language? The most natural result, unsurprisingly, is mockery. The other main problem, as I see it, is that you are in danger of pigeon-holing a section of society. And in this instance it's snowboarders. When one of the phrases suggested is a 'Ganjola Ride', meaning 'a ride on the gondola, while smoking...' well, you get the idea. What needs to be stressed is that since skiing fought back against its fuddy-duddy image, the new school is just as guilty of using silly language as the snowboarders. The dividing line here isn't the sport, it's the mindset of those involved.

Having said that though, even as someone who purports to be part of 'the scene', taken at face value the list is hilarious. I mean, does anyone seriously say 'Ganjola Ride?' I really want to be in a gondola queue this upcoming season and overhear some dope baggy-panted snowboarder turn to his mates and suggest it, because I would probably wet my own oversized trousers. Some of the phrases in the list are regular words or phrases in common usage, some make sense when thought about, and someare simply comedy. Here's a selection from abc-of-snowboarding.com that you may or may not hear on the mountain this winter:

Artic (sic) Cougar - An old lady who goes for really young guys on the slopes and in the lodge
Botwoker - A new snowboarder who can't stay upright
Dope - With style, cool. As in 'that trick's dope, dude'
Ghetto - Urban, cool. Most brands' snowboard trousers sport 'ghetto slits' at the bottom to ensure the trousers hang in a 'doper' fashion
Gnarly - Dual meaning - awesome, radical; difficult
Jibbing - Riding on something other than snow ie rails, trees, concrete posts. For example, you could partake in an 'urban jib session'
Ol' Pops - Old people on the hill, generally wearing 70s neon one piece suit
Rolling down the windows - When someone is off balance in the air and they rotate their arms wildly to try to recover
Shred - To ride aggressively, 'to shralp'. Common usage - 'It's shred time, dude!'
Sick - Amazing. 'That cliff drop was sick, man!'
Stack - To fall over badly, to crash
Steez - Style
Stoked - Alternate word for psyched. To be excited
Yard Sale - A bad crash in which you lose your hat, goggles, glasses etc

Of course, many of these phrases can be added together for extra effect. A popular one for old school riders is to 'shralp the gnar'. I would pray that if you ever hear this, the rider in question is taking an ironic swipe at the days when this was a serious saying, thankfully long gone. If he isn't, you need to run before the phrase sneaks its way into your vocabulary. So, hopefully this has explained some of the more obscure phrases you might hear on the slopes. But whatever you do, don't try to emulate them. Language is continually evolving, and you?ll never be able to keep up. Besides, there's nothing worse than a wannabe...

Author's note: This piece was written last before last season. Whilst out this last winter, I have to admit I did hear two young English snowboarders deciding whether or not to "take the ganjola." My skateboard is now no longer part of my possessions...