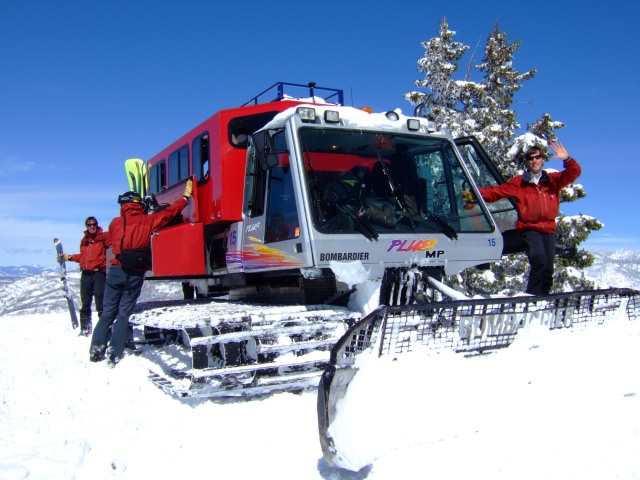 There is something about the words Cat-Skiing + Canada they have a lovely ring to them. It is almost as if the words were created to be together, like Double + Cheeseburger or Crisps + Beer!

And like these examples, a cat-skiing experience in Canada rarely does anything apart from live up to its billing. In January 2007 I got my opportunity and, with two friends, signed up with Powder Cowboy in beautiful British Columbia for a three-day trip over the Lizard range. Powder Cowboy purports to combine the legendary powder of the Canadian Rockies and the wild west culture of the Columbia Valley, where do I sign up?

At almost $2500 (£1400) for a three-day excursion, it was not a cheap affair but having 6000 acres of some of the world's best ski terrain, metre upon metre of fresh untouched powder snow and sharing all that with just twelve others was always going to be better than a bank holiday weekend at Milton Keynes snowdome, wasn't it? (No offense MK)

Arriving at the Ranch on the first night, we were warmly greeted by the staff at PC (howdy pardner!) and told to chow down and then hit the hay in preparation for an early start the next morning. As I tucked into a thick broth, I prayed that the cowboy references would peter out.

Morning arrived and after a rigorous safety brief, a demonstration of how to rescue someone caught in an avalanche and the obligation to sign twenty forms attesting to the fact that we had done the latter we were ready to saddle up.

For those that do not know, cat-skiing is similar to heli-skiing apart, that is, from the fact that skiers do not board a helicopter and whizz up the mountain but climb into a specially-designed cabin on the back of a snowcat (so called originally because it's a caterpillar-tracked vehicle). Yes, it is a slower climb to the top of each peak, but there is much to be said for the camaraderie in the back of the cabin; instead of fighting to be heard above the roar of a Bell 212's engines, we could sit back, snack on sandwiches, cookies and hot cider and tell mountain tales. Or you can listen to iPod music played wirelessly through an auxiliary input. Bring your iTrip! And although I did not admit it at the time, on day three after your sixth or seventh descent, the ten-minute sit down is very welcome.

At the top of each run, a guide will lead the group on a descent of major snowfields which eventually give way to forests of fir. I tried so hard to resist the habit of the omnipresent Americans as they hooped and hollered their way from the top to bottom but alas it was in vain. The feeling of snow (read white smoke) billowing over your face, down your neck and into your hat as you turn those skis is exhilarating. Never did I contemplate being excited by the feeling of being hit by a succession of faceshots but, in this occasion, it was worth it! It was awesome as my Americans friends would say even when I swallowed! Tis such a shame that we skiers have lost bragging rights over such linguistic expressions!

And at the bottom of each run, when the tailgunner has swept the area and heads have been counted, we re-boarded the cat and prepared to head uphill for another run. Another run that is completely different from the last. Another run that, surely, no-one has ever skied before!

The skiing is amazing, that is for sure. But the whole experience is second-to-none: the ranch, the food (we enjoyed delicacies such as prawn and crab salad rolled in smoked salmon and finished with lemon créme fraiche and mango coulis drizzle), the wine, the staff, the guests, the stories, the fireplaces...the laughter and good times came easily in those three days with Powder Cowboy.

In between training as an instructor on one of SnowSkool's course, you could definitely fit in a cat-ski adventure. Check out our course in Banff, Alberta and Big White, British Columbia.