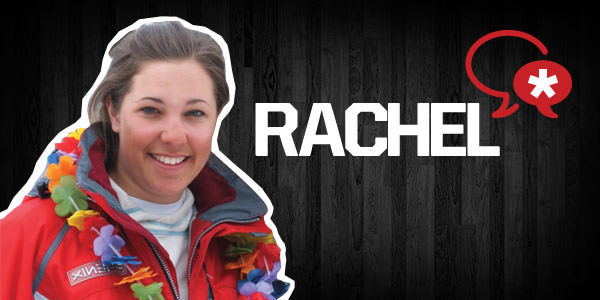 Rachel Adcock first clipped on a pair of skis aged 6 and a lifelong passion was to follow as Rachel and her family enjoyed regular holidays in Europe. At the age of 13, Rachel joined the Dragon Ski Club in Wales and started race training. Within one year she was competing on a national stage, and taking part in FIS (International Ski Federation) races in ski resorts in France, Austria and Switzerland.

After the SnowSkool course, Rachel landed a job at Selwyn Snowfields, Australia. She spent three-and-a-half months (between July and September) teaching ski racing to Under 15s in a country more renowned for its beaches than its ski hills!

After graduating, Rachel was elected as President of BUSC (British Universities’ Snowsports Council) with a remit to promote snowsports throughout Universities in the UK and to organise the Main Event – a 2500 person two-week ski & snowboard extravaganza in the Alps!