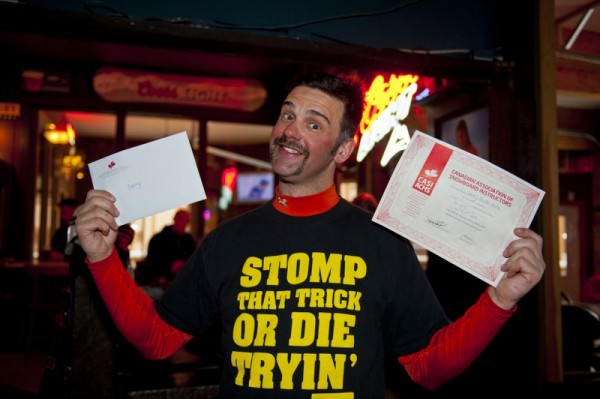 When passing through the gate for the flight back home from Geneva after a week of skiing in the Three Valleys, a moment’s hesitation can be forgiven; an involuntary paralysis while the mind attempts to conjure up an excuse valid enough to warrant turning round, getting back on the road and back on the skis!

This feeling is familiar to anyone facing an imminent return to the 9-5 routine after a spectacular  holiday on the snow. But for Danny Featherstone, a 35-year old Advanced Craftsman in the Yorkshire Steel Industry, the seeds of change were more firmly planted. “I didn’t end up turning round on that occasion, but I was dragged kicking and screaming onto the plane” said Featherstone.

Back at home, Danny determinedly set about making plans for a sustained return to the slopes. “People talk about changing their lives by going to the gym or by finding a new route to work…I was looking for something more fundamental.”  Danny started to look at re-training. As a snowboard instructor! From working with steel to working on snow, this was a significant change of direction!

Less than a year later, Danny was listening to a talk given by the Director of Snowsports at Big White, British Columbia about the instructor training course schedule that was to begin the following day:

“The course was fantastic. We were training five hours per day, five days per week with the most senior instructors in the Ski & Board School. I never knew how bad my technique was – the video analysis sessions were a real eye-opener - but it improved beyond measure over the course of the 11 week programme and I am now an expert snowboarder and fully-fledged ski instructor!”

Danny passed the Level 1 & Level 2 exams of the CASI (Canadian Association of Snowboard Instructors) and is now permitted to teach snowboarding extensively throughout the world. “There are a few restrictions…I can’t teach in France until I have passed additional qualifications but apart from that, the world is my oyster!”

For 2012/13, Danny is hoping to return to Big White to put the theory into practice. He is expecting his rookie season to be tough but rewarding. “The wage drop will be something that I will have to get used to [a first season snowboard instructor in Canada will typically earn $16 (£10) per hour and expect to work 25-35 hours per week] but, on the flip side, I’ll be snowboarding every day, keeping fit, being in the mountains…being happy!”

Danny booked a course with SnowSkool which offers ski and snowboard instructor courses in Canada, France, New Zealand and the USA.