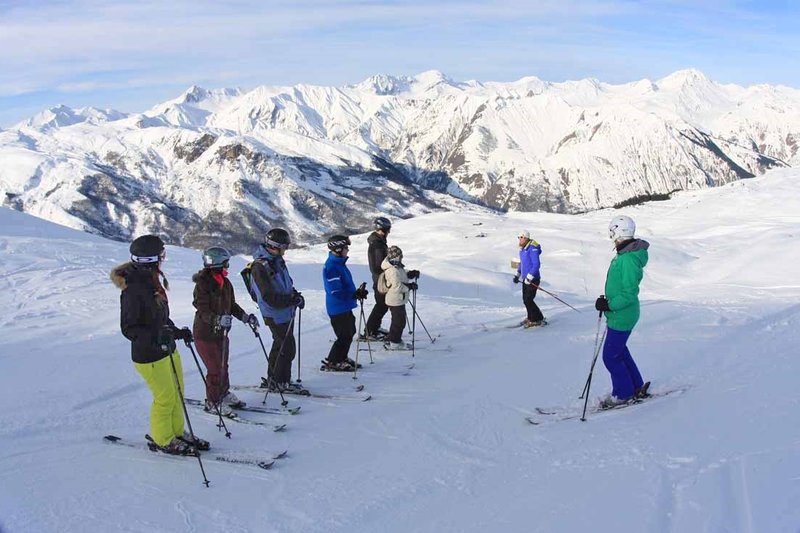 Becoming a ski instructor in France is tougher than in any other country - and definitely more debatable and confusing. Most instructors aspiring to teach in France’s famous resorts must sacrifice years of their lives to attain the necessary qualifications to teach.

But those who do choose to complete a ski instructor course, and train over the long haul, get to coach in some of the finest resorts in the world when they qualify. Cobsequently, the can earn a lot more than instructors in most other countries too. Our salary survey revealed France as the country where instructors earn the most money, by far, with fully-qualified instructors earning in excess of $60 per hour.

So here’s SnowSkool’s FAQ on becoming a ski instructor in France: 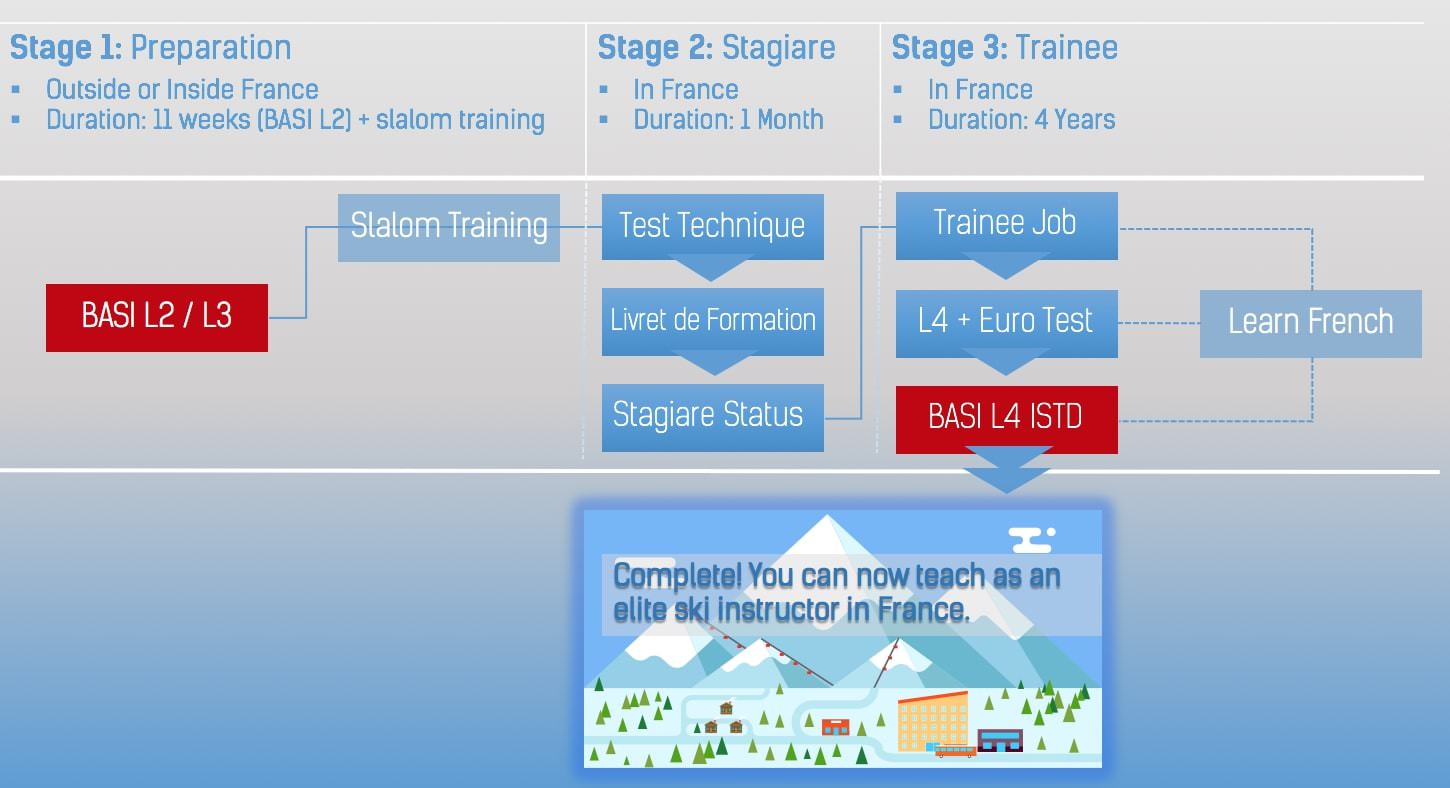 Why is it so difficult to become a ski instructor in France?

It is a very long and difficult process. And it’s based on a European work acceptance law that only permits a few European qualifications to be recognised in French resorts.

The official line for the tightening-up of the system is that too many instructors with varying qualifications from all over the world used to arrive in France to teach – and this influx impacted the quality of teaching and the safety of teaching. So additional laws and exams were enacted to ensure that, in order to instruct, you have to be on top of your game…

And with instructors working in France earning such a great hourly rate, the process reflects how competitive and lucrative it is to work as an instructor in the country.

The reasons can be debated but the fact is you need these additional qualifications.

Will my qualifications allow me to teach in France?

The awarding authorities vary: from the CSIA (Canadian Ski Instructors’ Association) in Canada to the BASI (British Association of Ski Instructors) in the United Kingdom. In France you’ll normally need to enter the system with a recognised European qualification, however we have heard from instructors who have gone on to teach in France with certifications from far-flung systems like the NZSIA (New Zealand Snowsports' Instructors Alliance).

So it appears that non-European qualifications can be recognised on a case-by-case basis - providing you can get through the slaloms (see later) and have enough experience to satisfy the French authorities.

But the British system, BASI, is internationally respected and one of the few awarding bodies that is certainly recognized in France (with SnowSkool you can train to gain your BASI Level 2) - and some other European countries also award qualifications that are definitely valid in France, such as Switzerland, Austria and Germany.

So, what exact BASI qualifications are needed to instruct in France?

In France, you must either:

So the first step for an instructor with a BASI Level 2 ski qualification, and the aim of teaching in France, is to sit and pass the Test Technique.

Yes. The Test Technique requires an extremely high level of ability to pass. It is a timed slalom, organised by the DDJS (local département authority). It is used exclusively in France for the purpose of accrediting trainee instructors.

To pass you have to complete an individual slalom to within a percentage of a time set by the course opener (20% for men, 25% for women).

But the course opener will be an impeccably-skilled national ski racer. So without flawless technique, fitness, power and precision, you are unlikely to pass. And it takes a lot of dedicated training - sometimes many years - to get through.

How many attempts do I get?

You can find out more about the schedule for the test technique here – and this is a list of the people and contacts responsible for organizing the test. Both pages are in French though; the process isn’t anglicized at any step!

The pricing is one of the least severe aspects of the test though – it’s free to do it. You just need to register, buy a lift pass and turn up!

What's next after the Test Technique?

With a BASI Level 2 (or 3) and a Test Technique pass you need to apply for a “Livret de Formation” certificate at the main DDJS office in the Isère. This certificate allows an instructor to gain ‘stagiaire’ status.

´Stagiare´ is French for trainee.

Stagiaire status is valid for four years, during which time you must become BASI Level 4 ISTD certified to continue working as an instructor in France. With this badge under your belt you can also teach independently.

Can I skip the Test Technique if I'm already BASI Level 4 ISTD qualified?

Yes. You are absolved. The Test Technique is solely for lower-level instructors who wish to work under the apprentice-style ‘stagiare’ arrangement - and work towards the BASI Level 4 ISTD in the meantime, to become fully qualified to work in France.

But one of the required modules to achieve BASI Level 4 ISTD is the Euro Test – another slalom test that’s used throughout the EU.  In order to achieve Level 4 ISTD you must pass this final test. The Euro Test is a ferocious, no holding back, Giant Slalom speed test. It’s even more testing than the Test Technique.

To pass you need skills and nerves of steel - and you must finish the course within an even smaller percentage of the intimidating time set by the opener (18% for men, 24% for women).

The opener is a professional ski racer with flawless technique and decades of experience.

Why all the slaloms?

Taking the official line once more, the French authorities would argue that slaloms are an excellent gauge of an instructor’s skills and balance. However, the approach is controversial because it arguably favours French skiers, who are more accustomed to slalom racing as it’s a big part of french skiing culture.

But there’s not much point ruminating on the politics. You need to pass the slaloms to teach and that’s that.

How long does the process take?

Expect the whole process, from Level 2 to a BASI Level 4 ISTD, to take at least four years. And that's four years of hard training, low wage jobs and commitment. And If you go back-to-back with the southern hemisphere that’s a full 8 seasons of graft.

But this is a general rule: some will take double that time, and a few exceptional skiers and racers may take slightly less time. It depends. But it’s certainly a hard process.

What qualifications does SnowSkool offer?

Anything special I can work on to get through the Test Technique more quickly?

There are a few things you can do to prepare for the slaloms. You could start with additional race training. Or you could join a local ski club, or university team that focuses on slalom racing to enable you to practice without shelling out on a course.

But there are plenty of courses specifically aimed at those looking towards the test technique – and many of them run in the Alps. However, SnowSkool doesn’t offer such a course at the moment.

Unfortunately, yes. French ski instructors must also speak French. So if you haven’t started learning the language already, then get going as early as you can. French can seem very different to English but linguists suggest about a 27% lexical similarity between the two languages - so once you get past the awkwardness of the pronunciation then you'll find that it's not as difficult as you first thought. Free language apps like Duolingo are a good place to start.

How much will I actually earn once I qualify?

A lot more than in other countries. Our recent survey of instructor salaries across the globe revealed France as the highest paying country. However, this reflects the difficulty in qualifying in the first place.

Is it all worth it?! Should I book a ski instructor course?

SnowSkool says yes. If you have the time and commitment, instructing in France is a dream job that pays a good living, earns you respect as an elite instructor within the industry, and it allows you to work in some of the world’s finest ski resorts.

But also bear in mind you can skip the years of extra training and teach in other resorts in Europe with a Level 2 qualification and still make a good living with a great lifestyle. Switzerland, in particular, offers comparative salaries, if with a higher cost of living.

Students on our ski instructor internship course earn a pretty generous $30 - $40 per hour, for starters, which doesn’t compare too badly with France.

Have you been through the process? Let us know…

Becoming an instructor in France is already complicated but there’s not much information available either and a lot of it is inaccurate. So if you’ve been through the entire process, or are going through it at the moment – or even if you’re just planning to teach in France in the future - then let us know in the comments.

We’d be keen to hear how you’re getting on so we can put together a detailed resource in the area - especially if you’ve entered the French systems from outside of BASI.

Life as a ski or snowboard instructor

Process for applying for Stagiare status (from BASI)

How to become an elite snowboard instructor in France