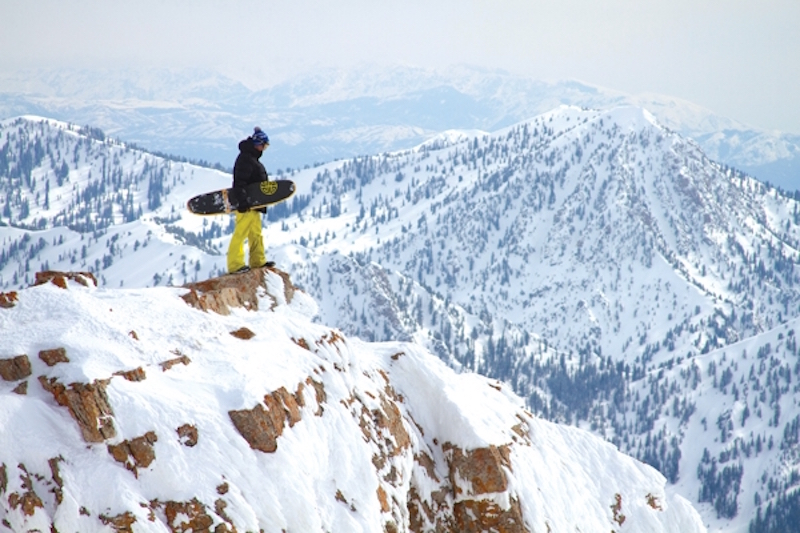 Imagine for a moment that your alarm rings at 6 a.m.  You peer out your bedroom window and in the pre-dawn light spy a new layer of fresh snow that has fallen during the night.  Immediately you telephone three friends and before you have finished your second cup of coffee you are loading those three buddies in the back of your Toyota Tundra destined for high altitude.

The Toyota is about to climb 8,000 feet up the side of the mountain.  From the back of the Tundra, you pull out a meticulously crafted set of wooden boards smartly designed to sail along the snow with you on it.

You have arrived in the Back Country.  The mountain is pristine, serene and silent.  The whirring sound of the chairlifts on the nearby resorts won’t start cranking for another two hours.  Your only company is your cadre of friends and maybe a few rabbits.

The snow is deep, soft and untracked.  There is no trail, the options of descent are numerous.

You are about to sail across the snow, unencumbered by bindings, the way a surfer sails across the crest of a wave.  There are no buckles or bindings on your board, it’s just your own two feet on a highly waxed plank of polished wood.  With boots on board, you are about to negotiate snow.   Un-groomed, untried, and unpacked, this is pure unadulterated powder.   There are no boundaries, no restrictions, the trail is where you make it.

Such is the world of Jeremy Jensen.  A mild mannered videographer for the marketing department at Utah State University by day and at all other times an inventor, advocate, and leading exponent of the sport of POWDERSURFING.

Since 2007, Jeremy has been a prime mover of the new sport, as an active participant and as a shaper of powder boards.  After much refining, re-designing and countless hours of on-mountain experimentation, Jensen created a company called “Grassroots Powdersurfing” that produces a handcrafted series of distinctive and unique boards that have proven their muster in the Utah outback.

Jensen has even designed a special board for practitioners riding on East-coast snow wishing to explore the challenge of powdersurfing in the backcountry of our nearby mountains.  Powdersurfing is not for the nervous.  It requires skill, balance, a healthy background and expertise in skateboarding, backcountry skiing and an intimacy with the varieties and conditions of snow.  The eskimos had fifty words for snow and powdersurfers must be aware of the variety of snow encountered for reasons of safety and success of negotiation.

Without the normal constraints found on skis and snowboards, the ability to perform binding free in powder requires precision, finesse, and a passionate sense of discovery.  The freedom of man on board without bindings is an exhilaration making such tricks as the “Ollie” a possibility for those who have already mastered the move on a skate board.

Jensen‘s website, www.powsurf.com is a complete compendium on the sport. It’s illustrated with extensive videos, a history of the development of the sport, an instructional “how and why” and a catalog of the colorful boards that are available for the curious athlete destined to ride the snow in a new way.

The website also includes an ongoing series of of short films called “The Powsurf Chronicles” that highlights the technique, tricks, possibilities and lifestyle of the devotees of binding free snow riders.  Enthusiasm for the sport is well chronicled in these lively films, produced and directed by Jenson, featuring his bold crew of swashbuckling snow adventurers.

For those of us seeking a new sense of freedom on snow, the bold adventure of Powdersurfing beckons.

Jensen simply states that all that is needed to participate in this sport is, “A properly designed board, gravity, mountains, soft snow and an open mind.”

Snowskool is excited, and inspired. But we'll be sticking to snowboard instructor courses, for now.

This is a contributed article from Greg Morell who writes the Snow Business Column in the Journal Tribune, which is the oldest daily in Maine, USA. Greg Morell is an avid skier, snowboarder, tennis player and freelance writer living on the southern coast of Maine in a beach town called Wells. He can be reached at [email protected] or on his cell at 207-251-8724.