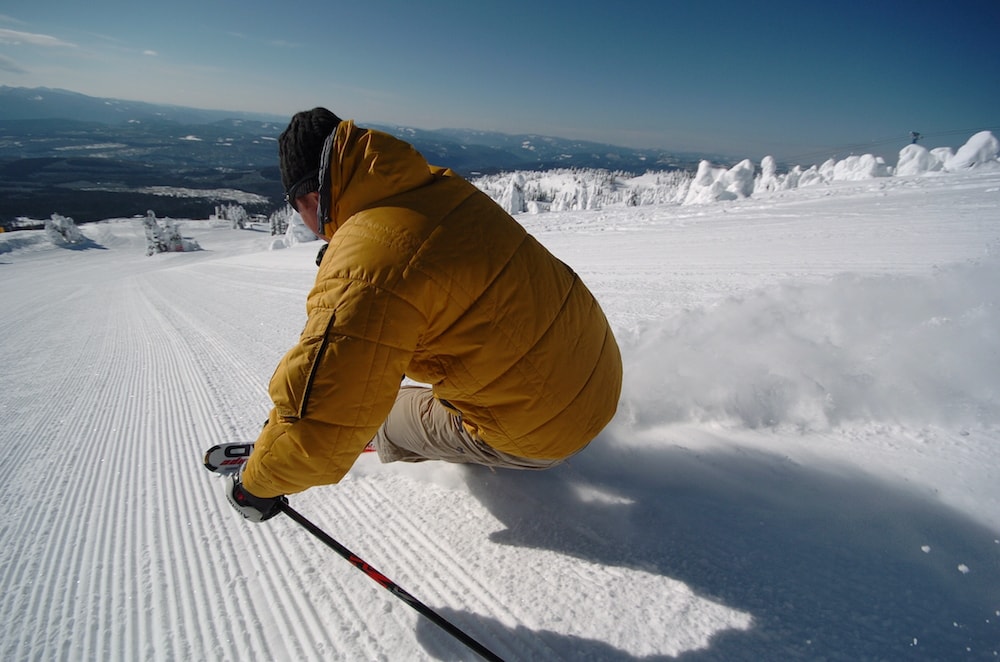 It’s a question that’s been around nealry as long as SnowSkool has been running ski and snowboard instructor courses (18 years to be exact!): which is faster - skiing or snowboarding?

With both sports relying heavily on gravity, to get from top to bottom of a mountain, perhaps it’s not as simple as you think? (We actually think it is...)

But let’s look at the detail:

Skiing vs snowboarding: Which is faster for beginners?

While this may not make a huge difference to speed, it’ll affect the rider’s confidence levels and interrupt forward momentum, resulting in a slower pace.

Skiing vs snowboarding: Which is faster for intermediates & advanced?

Even as you get better at both sports, the odds are still stacked against snowboarders.

While both skiers and snowboarders could be bombing the same slope, on the same tuned board/skis with the same wax, the largest amount of drag is experienced by the person on the plank.

The human body moves a lot more efficiently in forward-motion than it does laterally (try sprinting sideways) and when you turn on skis the symmetry of your body is the same for left and right turns, whereas boarders there is a lot of asymmetry between toes turns and heels turns.

What about the equipment?

Another differential, is the length of the average ski and snowboard. Skis will generally be longer than their equivalent board. This means there is more surface area for the skier to ski on. More surface area means your weight is distributed more evenly, meaning more speed.

Another important point is that when you can divide your weight on multiple edges then that also means more speed. Snowboarders must put everything on a single surface/edge, whereas skiers get to divide it between multiple (two) edges.

Are there figures to back this up?

Yes! The result is backed up even more when you look at world record speeds for both sports. Snowboarders have a recorded top speed of 203km/h (126mph), whereas skiers trump them with a whopping 254km/h (157mph). 126mph is still pretty frightening and faster than most skiers will ever go anyway, but there’s a clear difference.

What about jumps – does this affect jumps?

Yes, as you’d expect speed also affects air time and how far/how high each discipline can jump. The world record for ski jumping is 251 metres - the mighty length of two and half football pitches. There’s a reason there is no snowboard jumping event at the Olympics!

So, I should pick skiing and do a ski instructor course?

It seems pretty clear that skiing is the faster snow sport. Fortunately, speed is not really everything that skiing and boarding are about - tearing up the mountain dangerously fast is a sure-fire way of loosing respect on the slopes. You will rarely, if ever, see an instructor tearing it around the mountain at a hundred miles an hour with his lesson in tow. So, skiing should definitely not just be chosen based on speed. Snowboarding more than holds its own in every other enjoyable, or necessary, aspect when compared to skiing!

If you’re now at the point where you want to share your need for speed by qualifing and completing a ski instructor course - or that you want to defend and spread the love for snowboarding by becoming qualified as an instructor - compare the following locations: