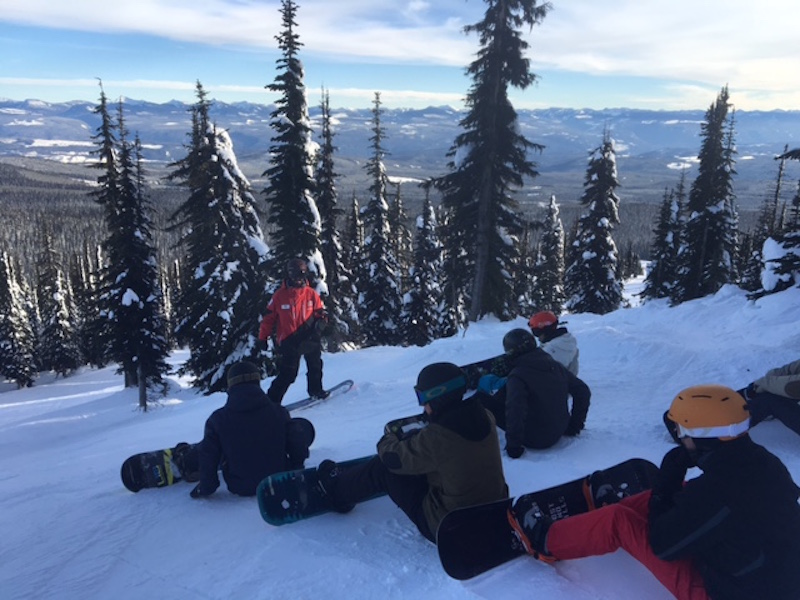 How much does a snowboard instructor actually earn?

There are tons of factors that can influence earnings, from qualification levels, experience, country and resort. We’ve spoken to ex-SnowSkoolers, working across the globe, to get you the salary figures.

If you’ve got any more info on the regions covered, or even a region that isn’t covered, then comments and feedback are welcome. We’d like this resource to become as detailed and accurate as possible. 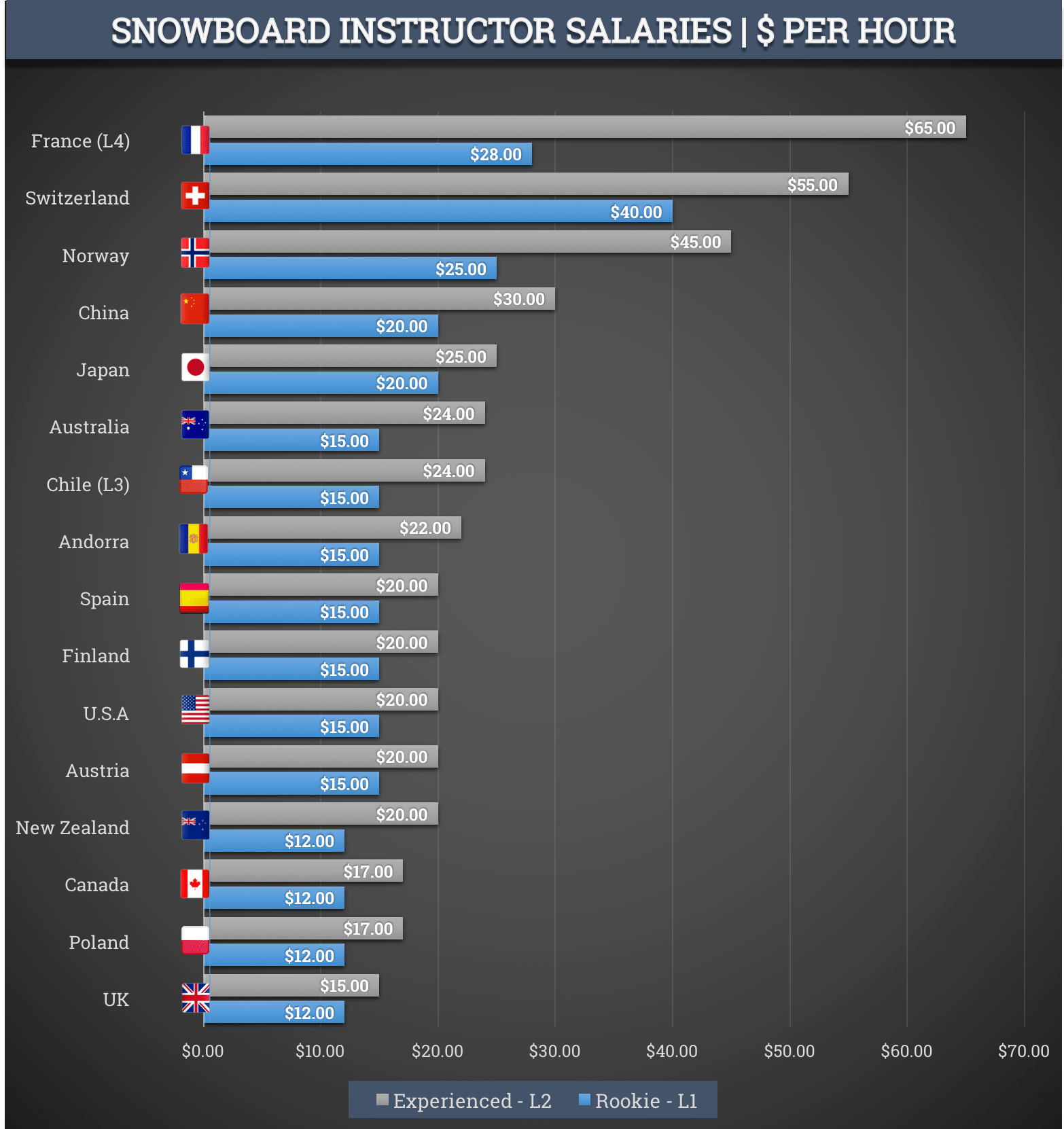 - Figures from 2019/2020 season.
- For consistency, all figures are in $USD and do not include tax.
- Our 'experienced' level is based on an accredited Level 2 Snowboard instructor qualification (either BASI, CSIA, SBINZ, or similar). The main exception to this is in France where the qualifications work differently. Chile will also normally require a L3 qualification.
- Our 'rookie' instructor level is based on a Level 1 qualification.
- Instructors should also note that, as well as pay, the number of lessons is important too. A lot of Snowboard instructors nowadays are getting their Level 1 ski qualification to complement their snowboard qualifications. This allows these instructors to enhance their earning potential in some mountains, where the potential lessons are fewer because of a high proportion of skiers compared to boarders. This is especially the case in the emerging countries and resorts where there still isn't so much demand.

In Australia, the payment system is designed to reward long-serving staff members and progresses depending on the number of hours worked.

If you’re qualified to Level 2, the starting rate will be around $18 per hour. But after 75 hours of logged work, this then increases to around $24 per hour.

The hourly rate increase again, dramatically, after 300 hours of logged work - to $45 per hour.

So, if you get a lot of hours logged, Australia can be one of the more lucrative countries to work in.

Unlike Australia, in Austria you’ll earn a fixed, monthly salary that is guaranteed - regardless of the demand for lessons.

If you’re Level 2 qualified, expect to work 36 hours per week and get $2450 per month for your efforts. That works out at about $20 per hour.

Norway is consistently voted one of the best countries to live and work in. It also has stunning mountain scenery and a sprinkling of ski resorts. There are roles in the country for Level 1 and Level 2 qualified (or equivalent) instructors.

However, the roles available at this level are largely as trainee instructors. Most instructors properly plying their trade will hold an ISIA qualification to Level 3 or above.

Norway has one of the highest average wages in the world, so hourly rates for instructors in Norway do reflect this. But remember, the cost of living is also extremely high. Fancy a beer? That’ll be €10 please!

The Finnish are big fans of flexible work culture – and this also applies to snowboard instructing. Most board instructors working over in Finland are employed as freelancers and get paid an hourly rate. This is usually around 20€ / $22 per hour.

There are season posts available too. Employed this way, you’d have a 38-hour working week. The minimum salary will be lower though at about 11€ / $12 per hour.

Sunny Spain also has snowy mountains and there are opportunities for snowboard instructors in the Sierra Nevada in the south, and the Pyrenees in the north.

Spain’s economy is now one of the fastest growing in Europe and Instructors we’ve spoken to earn relatively well. The pay is decent and the cost of living is a lot lower than in the Alps too.

So, while it might not be the first region you’d think of working in, it can be a good option if you do find an open position.

Becoming qualified isn’t quite as tough as in France, but there are fewer opportunities without an ISIA level qualification (such as BASI Level 3) or above.

This small but snowsports-centric nation in the Pyrenees has jobs for snowboard instructors. Like Spain, you'll usually need at least a Level 2 qualification to find consistent work. Expect around €20 / $22 per hour. If you have higher qualifications, then this amount can increase.

The Alps is where the Brits go, but the Pyrenean resorts of Andorra are more frequented by the French and Spanish, with lots of trips and tours from cities like Barcelona.

Consequently, it follows that you're more likely to get a job and earn more if you can speak decent Spanish or French, or even the local-lingo: Catalan, which may be the best for extracting tips.

Of all the regions we’ve looked at, Canada offers the most transparent and easy-to-understand system. The payment structure is very clearly connected to the qualifications that snowboard instructors have.

This may seem low, and it is lower than some other regions, but a big plus of working in Canada is that it is becoming one of the most popular places in the world to snowboard. This means there are a lot of lessons to give. So if you’re qualified, and can work, then you should get to teach a lot, and earn accordingly.

Another perk of working in Canada is the North American tipping culture. Tips can significantly bolster seasonal income. Or at least they used to - a lot of the instructors we spoke to mentioned that tipping is becoming increasingly rare.

From the simplest payment structure, to the most varied... Japan’s system is more complex, but we have managed to get some guideline figures from ex-SnowSkoolers working in resorts on Honshu and Hokkaido islands.

Snowboard instructor pay in Japan is pretty good! A Level 1 instructor should expect $20 per hour and a Level 2 instructor, $25 per hour.

Those are the basic rates, but some Japanese resorts do use a progressive payment system - like in Australia - where instructor pay increases 5% for every 75 hours worked. Under this system, starting rates are a bit lower, at $17-$18 per hour, but the pay can become rewarding as the percentages stack-up.

New Zealand, what a country to live and work in! While the scenery is spectacular, Kiwi resorts are not quite as generous as their counterparts in Australia.

Level 2 instructors should expect to earn $18-20 per hour. However, if you’ve only got a Level 1 qualification then not only will you struggle to get work, but even when you do - the hourly rate is likely to be around $12 per hour.

Here’s some more advice on how to get work in New Zealand as a ski or snowboard instructor.

Chile is one of the emerging destinations that skiers, snowboarders and instructors are flocking to. It’s a pretty good place to instruct. The average salary is high (comparable, or even better than in North America) the snow is world-class, the slopes are quiet. The demand is increasing each year and and so are the jobs available.

A couple of caveats though: you must have a working proficiency in Spanish and a L3 qualification is normally the minimum requirement.

And, like in other emerging destinations, snowboard instructors may stand a better chance of finding work if dual qualified.

China's ski resorts have followed the boom in the rest of the country and skiing is now hugely popular in the country.

Not only that, but the terms and conditions are some of the best on the planet. Instructors earn well, with a low cost of living, and packages tend to be comprehensive. As well as your salary you can also get accommodation, flights, visa, and daily meals with the job.

Chinese is hardly the easiest of languages to learn but luckily there are plenty of opportunities for English-speaking Instructors, as English is the international language for skiers and snowboarders that come to China.

However, if you fancy a challenge, and you’ve got a head for languages, then Chinese-language skills would be a boost to your CV.

The graph at the start of the post includes an average that we’ve worked out. But here's some more info on the major cities and resorts.

The cost of living is high in Switzerland. Everyday items can cost an intimidating amount of money. Thankfully, Swiss ski schools do pay generous hourly rates to snowboard instructors so they can get by, plus a bit more.

Experienced instructors can earn $55-65 per hour; rookie instructors should about $40 per hour.

Wages aren’t that consistent in the U.S and can vary a lot depending on the resort and coast.

In Vermont, on the east coast, resorts pay around $20 for a Level 2 instructor and $15 for a Level 1 instructor. Moving across to Colorado - Aspen instructors earn more. With the same qualifications, they can earn $23 and $28 per hour respectively. Further west in the Californian resorts, rates drop back down again to between $15 and $20.

Tips can increase income but these are becoming rarer. On the plus side though, the U.S, like Canada, is also an extremely popular place to snowboard, so opportunities to get more lessons are rife.

Getting work in France is tougher and more complex than in any other country.

You can read our guide on becoming a snowboard instructor in France here. But basically you need to be qualified to the highest level, BASI Level 4 ISTD or equivalent, to find work.

This takes a lot of time and dedication but once you have qualified as a BASI Level 4 instructor you can earn $50 per hour (€45 Euro per hour) or above. This can go up to as much as $75/85 (€65/€75) per hour depending on the ski school, experience, clients etc. And that’s before tips, which can be substantial in some prestigious resorts like Courchevel!

The hours of work are important too. But France is as popular-as-ever for skiing and snowboarding holidays. And if you do join the elite sect of French snowboard instructors then you can expect between 200 and 800 hours, depending on the ski school, the snowfall, busy seasons etc.

Within Europe, Poland is gaining ground as a ski destination due to easy access, cheaper flights, and the growing trend for skiers and snowboarders to try somewhere different instead of the (sometimes expensive and crowded) resorts in the Alps.

Infrastructure is getting better each year and the snow can be pretty reliable too.

Instructors won’t earn quite as much here as in other European resorts but, with far more affordable living costs, it can actually work out that you take home more. With at least a BASI Level 2 (or equivalent Level 2) you can apply to Polish ski/snowboard schools.

In the UK, there are limited opportunities to work outdoors on snow - with most jobs in the resorts of the Scottish Highlands. However, there are hundreds of dry slopes and a growing number of indoor facilities and pistes where you could find work too.

Normally instructors need a Level 2 qualification to work in the outdoor resorts, but a Level 1 qualification is enough to teach indoors and on dry slopes. Pay is a bit lower than other regions in Europe, but the conditions are far less predictable than the higher resorts in Europe so getting enough hours to make a living is more difficult - especially when it comes to snowboarding, which is generally less popular than skiing in the UK.

Working in the UK might not be a long-term career move but it can be a fairly comfortable way to gain experience before moving elsewhere.

Ski or snowboard instructing is not a fast-track to millionaire status, but the pay can be pretty good! Remember to take into account cost of living when you're deciding where to aim for.

And it’s about the lifestyle too: living and working in stunning mountain environments, staying active and fit, inhaling the freshest air, freed from the daily commute and office grind, doing what you love and getting paid for it! How can you put a price on that?

As before, if you’ve got any information on the areas featured, or new areas, then please let us know in the comments.