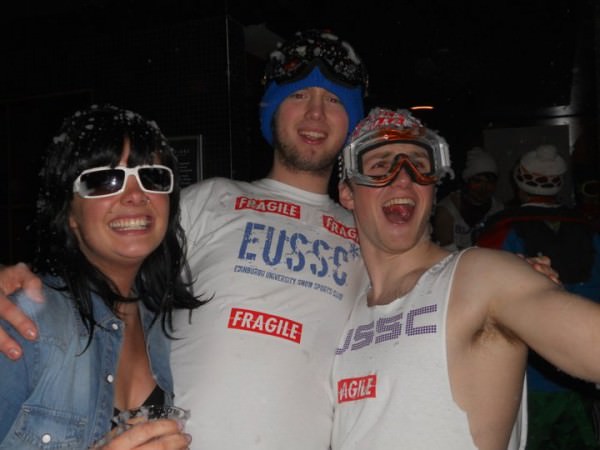 Edinburgh University Snow Sports Club (or EUSSC for short) is the largest snowsports club in Scotland boasting over 700 members. Last year they took a record number of these members on their Christmas trip (350 to be precise) and were crowned BUSC champions at Main Event 2010. It’s fair to say that when it came to the skiing they were a dominant force pulling in the following results:

Current EUSSC President, Mike Davies, only found these results recently while trawling the BUSC website… it seems the allure of the après and the sound of golf ball in pint is all too alluring for some!

But then he wasn’t president last year…

We caught up with Mike to fill us in about everything EUSSC and talk about his plans for the club this year:

People say that you can’t put a price on perfection – I say that’s bollocks cos it’s 20 quid and it’s a bargain, joining EUSSC is the best decision you can make at Edinburgh uni!

We are the biggest (and best) club here at Edinburgh and with so much going on it will take over your life in the best way possible.  Last year we broke all our records in terms of numbers of people coming on trips and attending socials so this summer, me and the rest of the committee have been working hard and have come up with a pretty intense EUSSC calendar to make this year even better…

We cater for everyone; snowboarders and skiers, racers and freestylers, from complete beginners to aspiring Olympic athletes.  Each week we will have at least at least one trip whether it’s to the local dry slope, indoor dome in Glasgow or heading North to the real hills.  We’ve also lined up an amazing holiday at New Years to Val d’isere which will see over 350 EUSSCers taking over one of the best resorts in the world all for less than £400. That along with BUSC which is being run by old EUSSC alumni should keep everyone happy!

We’re very stoked on our social plans for the coming year as we've secured pretty much free reign on our sponsor club as well as getting in a big name to play a EUSSC affiliated night each year, but that of course is a secret for now…

This year we’ve also secured killer drink deals, enough bar crawls and crazy themed parties to make sure Thursday nights will be the only one you’re looking forward to.  As well as the chance to get pissed with loads of likeminded people you’ll also get the chance to come find me or any of the other committee members to ask any questions you may have about the club or ways you think we can run it better – our ears are always open. Just watch out for golf balls.

That being said; I took the advice of a member last year and well, long story short … eating yellow snow on the off chance it may be beer is not as clever as it might sound.

For more info on EUSSC check out their website