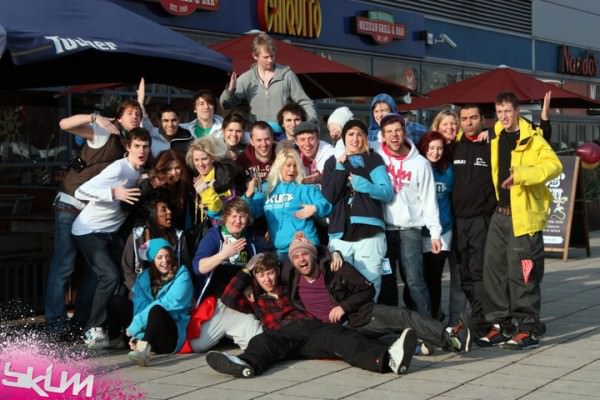 SKUM aka The University of Manchester Ski and Snowboard Club, lay claim to being the largest and loudest snowsports club in the UK… and although there are a few other clubs around the country who would object to this claim (*ahem* Leeds) there’s no doubt that SKUM are definitely loud and proud!

SKUM members are probably the easiest to spot at any university event, not only because there are normally loads of them but also because they’ll all be decked out in some sort of ridiculous fancy dress! Such commitment is commendable, while some other clubs are struggling to get their members to compete at all, SKUM have their members there in their droves, most likely semi-nude and covered in body paint too. Not only are SKUM notorious for knowing how to party (there are too many outrageous stories to recount here…) they’re also a formidable force on the university competition circuit, this year alone they took home the following accolades:

We caught up with current SKUM President, Simon Bellamy, for a few words about the coming year:

Everyone's heard of SKUM, literally, we’re the ones trying to make as much noise as possible. There's no doubt that we love to represent our club and university, we’re a tight knit group of people brought together by a single love of snowsports!

But we do have a serious and secret side.... Whilst many of our members will be found at the top of any hill enjoying the more social side of UK snowsports, there are always a core group of competitive members putting their all into winning and representing The University of Manchester. In the last two years our most notable achievements have been the snowboard team winning BUDS Slalom twice, and BUISC Slalom this year, and our ski team winning the Kings Northern league.

Our plans for the next year include a tour to Tignes in December with 300+ members. We will be making the most of the expansive Espace Killy ski range, Val D's Folie Douce for apres, and then the Tignes nightlife, hopefully all of which in fancy dress. Then on to BUSC Main Event for the first time in four years, here we will hopefully continue our competitive success and enjoy the Austrian party in Saalbach.

Bring on next year, the blend of skiing, snowboarding and après fun, which in SKUM is open for everyone from beginners to seasoned instructors, and in my opinion what the Alps and university snowsports is all about!

We’re also very excited to be working with SnowSkool this season, their ski & snowboard instructor courses are a perfect way for our members to keep living the snowsports dream after uni!

We couldn’t have said it better ourselves… see you in Manchester!