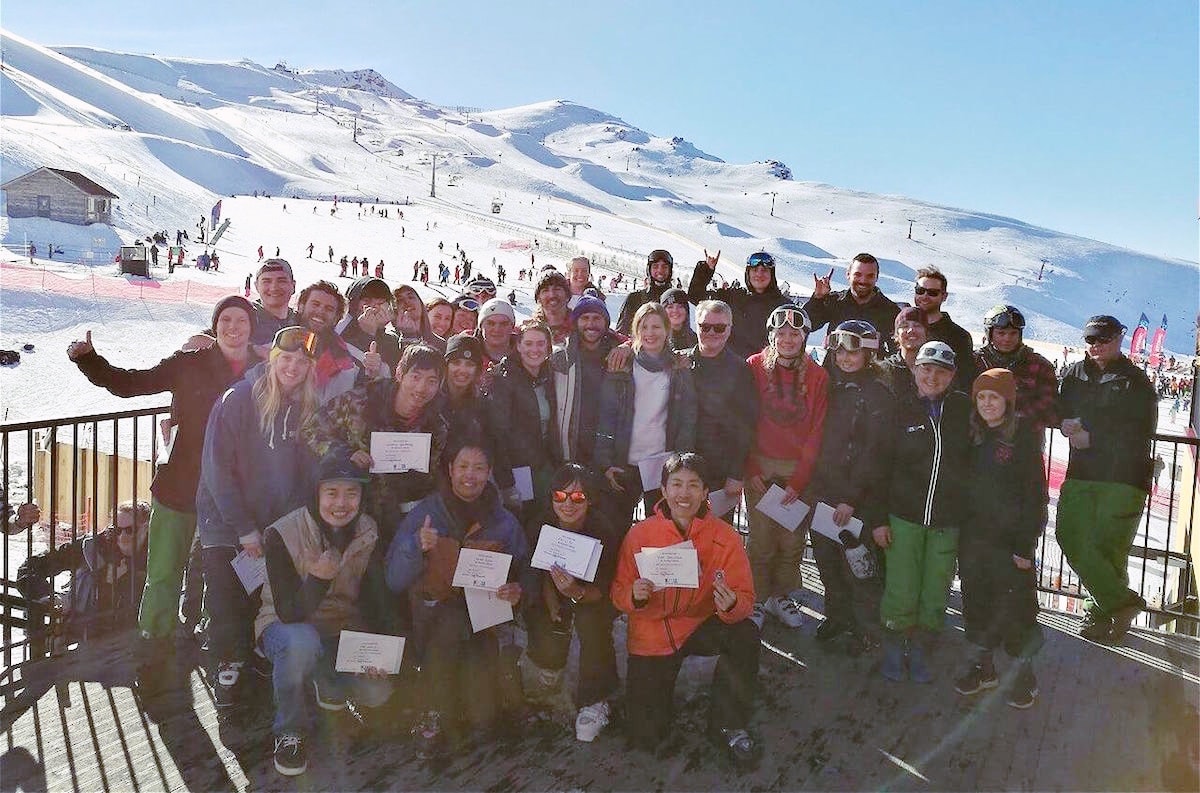 We often get asked, what is the best ski instructor qualification? When it comes to joining a ski instructor course, it’s not just a case of picking the course that sounds the most fun, in the place that has the best nightlife, or the best terrain. You may also also want to consider the qualification gained, the level you wish to achieve and where you want to work in the future.

So, here we are to try clear the fog and make picking the right qualification and the right course, a simpler task.

Which qualifications are there to choose from?

There are over 40 qualifications out there, 39 that are members of the ISIA (International Ski Instructors Association). Whichever qualification you choose you want it to be recognised by the ISIA. Being governed by this organisation means that all ISIA qualifications have worldwide recognition - and that reflects across all ISIA member countries.

Practically, what this means is that any qualification gained in one of these ISIA countries can be used to get a job in any of the other ISIA members’ countries. This allows you the freedom to work all over the world with any one of these national qualifications, with very little restriction apart from getting visas or a bit of second language competency if you need to.

See here for more details on the ISIA and the 39 countries involved:

‘Which instructor qualifications are best?’ and 'Where can I work with my qualification?' feature in our FAQs!
(click to see more frequently asked questions)

There is no one answer to this question of course ... but there will be no end of opinions given on the subject!

We’ll have a quick look at, in alphabetical order, BASI, CSIA/ CASI and NZSIA/ SBINZ ...

BASI hold itself to the highest international standards and, as a result, its reputation is well-regarded throughout the world. Alongside passing tough technical exams (five days for Level 1 and ten days for Level 2), successful BASI candidates also have to log 70 hours of Ski & Board School experience, a 12 hour first-aid course and a child protection module.

Canadian ski hills will look to employ instructors with the CSIA (ski) or CASI (snowboard) qualifications. These qualifications have a significant customer service aspect to them in recognition of the role of a modern instructor in making sure that skiers & snowboarders have a fantastic time when they are learning. Compared to other regulatory bodies, Canadian instructor exams have a greater emphasis on skiing/ riding over teaching which is appealing to a lot of people.

Like the UK, New Zealand is a net exporter of instructors and so has created qualifications that stand up to their international equivalents. Sitting somewhere in between BASI and CSIA/ CASI ... the NZ qualifications have a great blend of skiing/ riding alongside more technical teaching methods.

Are they all recognised equally?

These three qualifications all have international recognition - and will allow you to work around the world in fellow ISIA member countries - but there are some differences. The main distinction is between European qualifications (BASI) and non-European (CSIA and NSIA).

I will not say that one is better than the other, as this would be hard for anyone to fully justify without being biased. However, the big difference between European and non-European qualifications is the level of training, intensity and length of examinations that take place in Europe. This quick table will outline these differences. 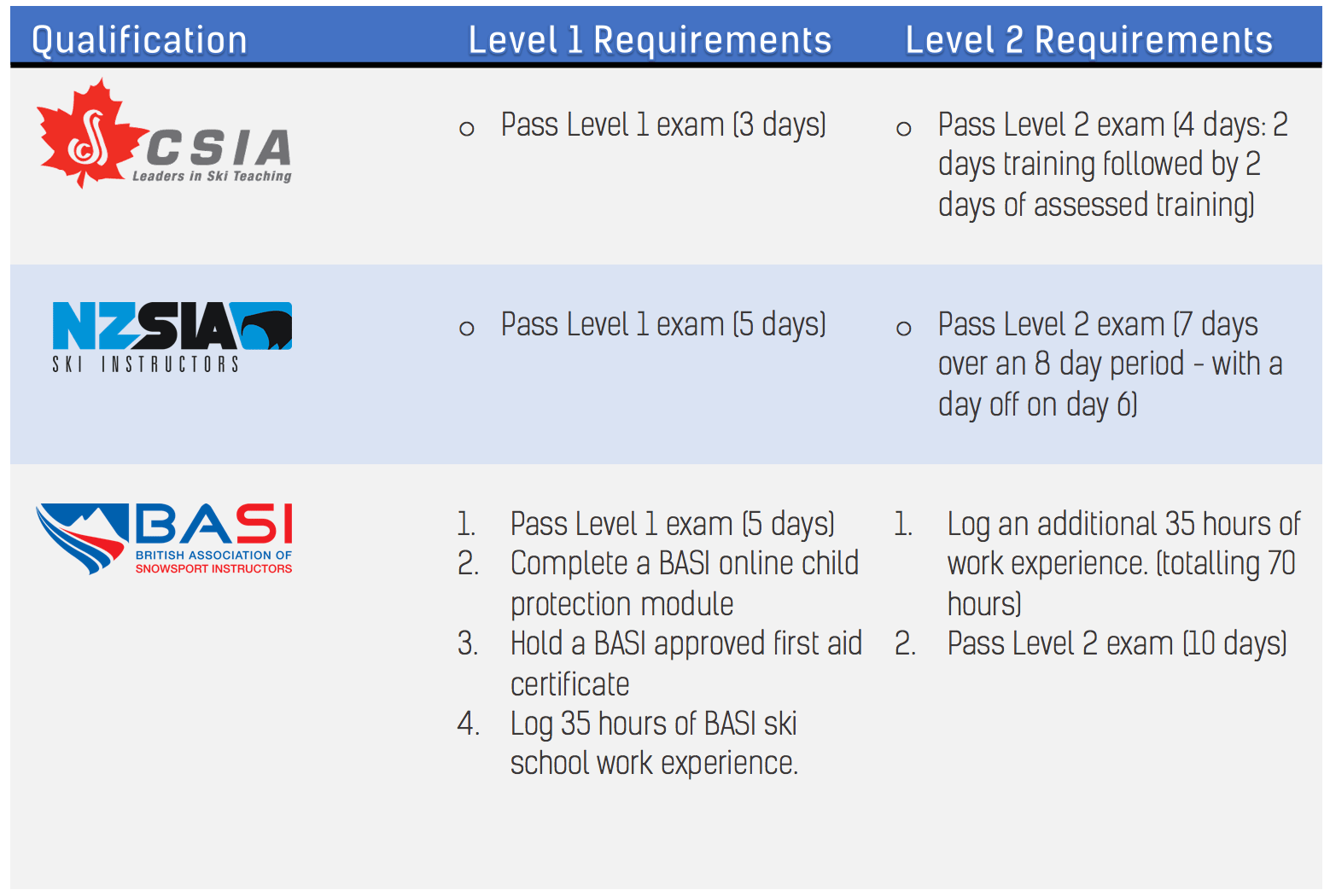 *Austrian, Swiss, French and Italian all have similar or higher requirements, intensity of training and exam structure to BASI.

What this sometimes means is that you may be more employable against competing candidates in Europe if you have a European qualification and they don’t. However, do not let that put you off gaining CSIA or NZSIA, they are both great qualifications that are recognised all over the world, just the same as BASI.

If I choose one qualification now, does that mean I am stuck with it?

What you are required to do to make this transfer can depend on personal factors like additional qualifications and experience you have as an instructor. But as good rule of thumb you will need to sit the certification on the new system you wish to join, which is equivalent to your current level.

For example, let’s say you went to New Zealand and achieved your NZSIA Level 1 and 2 and then went on to work around the world. But you then decided that the financial draw as an instructor in Europe was calling you. In this case, a European qualification could benefit your employability and you could simply take the 10-day BASI Level 2 exam to transfer over.

Which Sk Instructor Course Level do I need in order to teach around the world?

Level 1 is the basic qualification, and while you are still a qualified instructor with Level 1, this level is really only designed for use in the domestic country of origin. CSIA Level 1 in Canada, NZSIA Level in New Zealand, BASI Level 1 in the UK, and so on.

Level 2 is regarded as the minimum level of qualification needed in order to work freely around the world. Level 3 will put you above the rest. Level 2 is the most common qualification employers see in applications, so working and training to take the next step and Level is a great goal to push your career further (and earn a bit more too).

SnowSkool does not run any Level 3 courses at the moment but we can help to advise the best path to take if plans for Level 3 are already being formed.

I want to work in France, which is the best qualification to get?

The process to work in France is not easy, no matter which qualification you gain, but if this is a big goal for you then BASI would be the strongest starting choice for you. More information on the process to gain work in France can be found in our detailed post on becoming an instructor in France:

SnowSkool’s tip of the day…

Too many people concentrate on finding the right qualification early on and forget that they can all be used around the world - and your career as an instructor will not be judged solely on the qualification that you chose so early on. And while we started the post saying that the qualification is often forgotten about, equally don’t focus too much on it.

You may never get another chance to spend 11-13 weeks skiing 5-7 days per week in Canada, New Zealand or France with 40-60 likeminded people from around the world. So also make a decision based on a ski instructor course that appeals to you the most; the powder and nightlife in Banff; tree skiing and slopestyle apartments in Big White, the largest ski area in the world with an après scene to match in Meribel - or the adventure capital of the world: New Zealand.

That said, if you have working in France or Europe as an immediate target, then BASI may be the right choice for you. Otherwise it does not matter so much which qualification you choose at this stage. You can always retrain and transfer at a later date.

Get in touch to find out which is the right course or qualification for you. Meanwhile here are our upcoming ski instructor courses and the qualifications you'll gain on them...