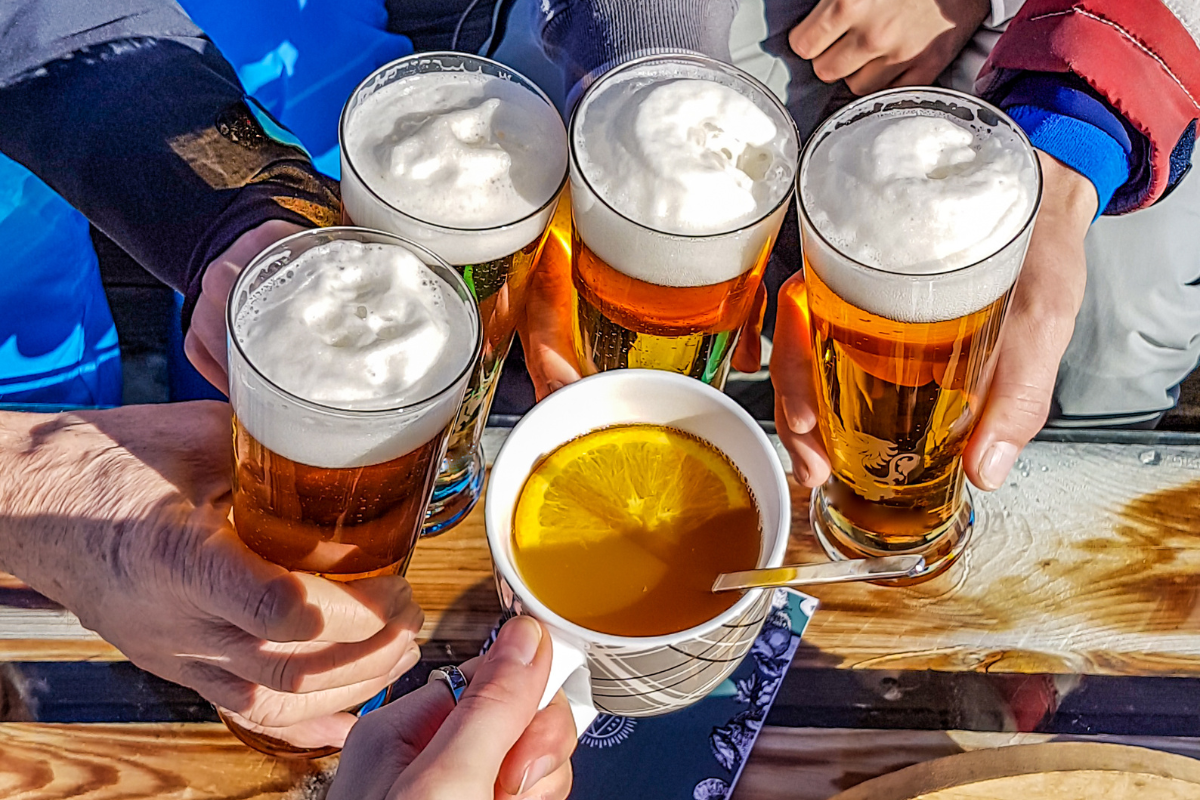 Apparently, the custom of enjoying some warming alcoholic beverages after a long ski day originated in Norway in the 50s. France subsequently got wind of the tradition (any excuse for a bev) and gave the activity its name: “after ski”. Après spread throughout Europe and into ski resorts worldwide. Austria deserves a special mention for their exceptionally wacky après featuring traditional Austrian music and songs.

There are many ways to enjoy aprés and, after many years of ‘research’, we feel like we’ve observed a few types of typical après-ski character. The question is...

Which one are you?

Kicking off at midday

How to spot one: Checking their watch as they head up the third lift of the day, calculating how much is the minimum acceptable ski time. They ski or ride in pretty tatty gear, knowing full well it’ll be sprayed with alcohol and stuffed under a sticky table all afternoon.

Après drink of choice: Pints of course, to enjoy the build up to when the others arrive

How to spot one: Browsing posters to see which bands are in resort. There’s nothing more these guys love than a pop-rock covers-band; and you’ll find them belting out every word. Oh, and an après essential - they’re accustomed to a bit of table-dancing too.

Après drink of choice: Guinness (but don’t start to get snobby about how it doesn’t taste as good as in Ireland *eye roll*)

How to spot one: Turning their nose up at paying 10 Euros for a pint (but asking for an empty plastic cup). They’re either fresh out of uni and still pinching the pennies, or cruising on a lush new pair of skis which have blown the season budget.

Après drink of choice: Something weird, that seemed a good idea at the time, like apple brandy.

How to spot one: Lingering at the edge of the crowd and/or outside with the smokers, getting a bit of ‘fresh air’. They’re perfectly happy nursing their beer and bobbing along - so don’t worry about them. Handy to have one of these guys in your group - who else will watch the jackets??

Après drink of choice: Cans of extra strong beers from the local supermarket.

How to spot one: They’ll be staggering around in ski boots, far into the evening, having foregone dinner altogether. There’s a point in every après session where the decision has to be made to a) go home & change into shoes, b) stay in boots, but head home shortly, or c) call it a day before heading out again later. If a certain level of booze is consumed, another option emerges: carry on drinking and dancing - and ignore the fact your feet are strapped into solid plastic blocks! Just don’t forget where you left your skis…

Après drink of choice: Shots are the only way this work-horse manages to keep going into the night.

How to spot one: There’s always a big spender out at every après sesh. These guys aren’t necessarily flashy in their day-to-day life, but après-fever takes hold… They’ll claim to not understand the exchange rate, or that “you only live once”! Nine times out of ten they regret it when the bank statement comes in… but will do it all over again in a heartbeat!

Après drink of choice: Bottles of anything, extra points if it’s bubbly and comes with a sparkler stuck in the top.

Other iconic après beverages worthy of a mention include: Jaeger bombs (a classic - ensures maximum table dancing), beer peche (for when you’re sick of pints - just add a little peach syrup), schnapps (après in Austria and you won’t be able to avoid the stuff), toffee vodka (new to the roster - suspiciously nice) and genepi (a sickly, bitter, herbal concoction from the French mountains - definitely not nice).

If Après is your priority on a ski season, then our courses in Méribel will be your idea of Euro-après heaven. That being said, you might find a bit of what you fancy in Canada too. In Big White, fewer bars means a tight-knit community who often host après back at their apartments. In Banff, yes you hop on a bus to go via home first, but your après could begin with karaoke and become a proper night out in the town.