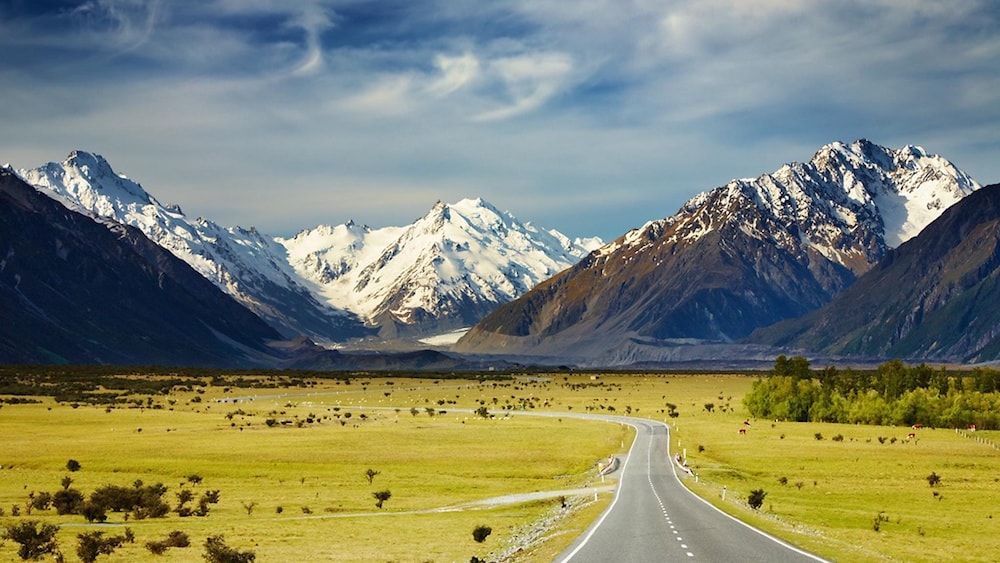 Why train to become a ski or snowboard instructor in New Zealand?

The quick and short answer is: because New Zealand is the best country in the world.

But that’s not quite enough for an entire blog post... so here are just eight reasons (we could go on!) why training as a ski or snowboard instructor in New Zealand is the opportunity of a lifetime.

Enough said? Click here to skip to info on our NZ courses!

The unbelievable views are likely to be the first thing that strikes you, on arrival in New Zealand. Particularly the jaw-dropping Alpine scenery around Wanaka will make you feel like Gandalf striding through Middle Earth, or at least Julie Andrews singing The hills are alive with the sound of music... (maybe). 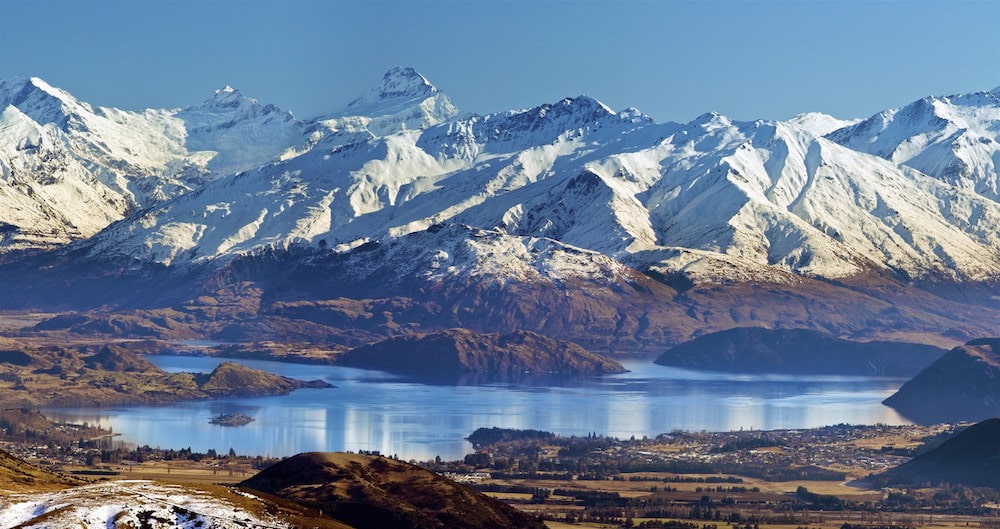 The friendly people add to the appeal and, unlike many countries in the world, the indigenous people generally haven't been pushed aside in favour of those who’ve arrived more recently.

The Maori culture is celebrated throughout the country, to this day, making the country a rich and varied place – as well as one of the friendliest countries in the world. This really helps as you're engaging with people - from trainers, to examiners, to customers in lessons - for the majority of your ski or snowboard instructor course.

When it comes to snow, New Zealand is, during the months of June to October, the best place in the world for skiing and snowboarding. SnowSkool gives you the chance to train as a ski or snowboard instructor, during the southern winter, so that you are qualified and ready to work in December for the northern winter. This gives you an extended ski season that might just about make up for the wash-out that COVID created this year.

With its south facing slopes fronting-up everything that the Antarctic has to offer, Cardrona is New Zealand’s premier Alpine resort. It boasts ideal training terrain, plenty of free-ride areas for improving higher-end riding skills and some of the world’s best freestyle features (Cardies is the host venue of the Burton NZ Open).

Indeed, it has no less than four freestyle terrain parks including the biggest one in the southern hemisphere with kickers up to 85ft, an Olympic Superpipe, a skier-cross circuit and a whole range of jib features.

One fact that that we also like to cite is that 50% of all NZSIA-appointed Trainers and 50% of the NZSIA Interski demo team (those that represent New Zealand at instructing on the world stage) are based at Cardrona. This means that the 20-ish other resorts in New Zealand have to share the other 50%! 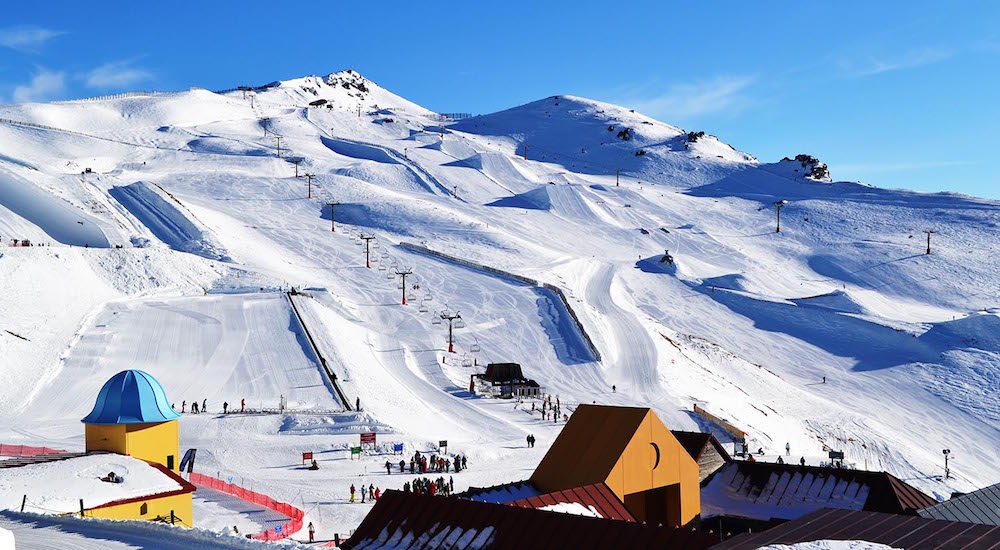 New Zealand's South Island boasts some of the world’s best vineyards; the Sauvignon Blancs, Merlots and Cabernet Sauvignons from Hawke’s Bay, Marlborough and Central Otago have, in a relatively short time, become recognised as some of the world’s tastiest tipples! You'll be working hard on an instructor course in Cardrona – so kicking back with a glass of the good stuff will be well-deserved.

New Zealand has a big sporting culture which you'll feel fully immersed in as you train to become a sporting professional yourself. The country’s spirit is embodied by the revered All Blacks, most of whom are genuine role models (in a world of spoilt, misbehaving football players); and the pre-match Haka is a joy to behold.

Going one step further, extreme sports are also embraced by New Zealand – it is the adventure capital of the world, with fantastic opportunities to sky-dive, jet-boat and mountain-bike. It is also the home of Bungee! Get involved, SnowSkoolers of the past have – we dare you! 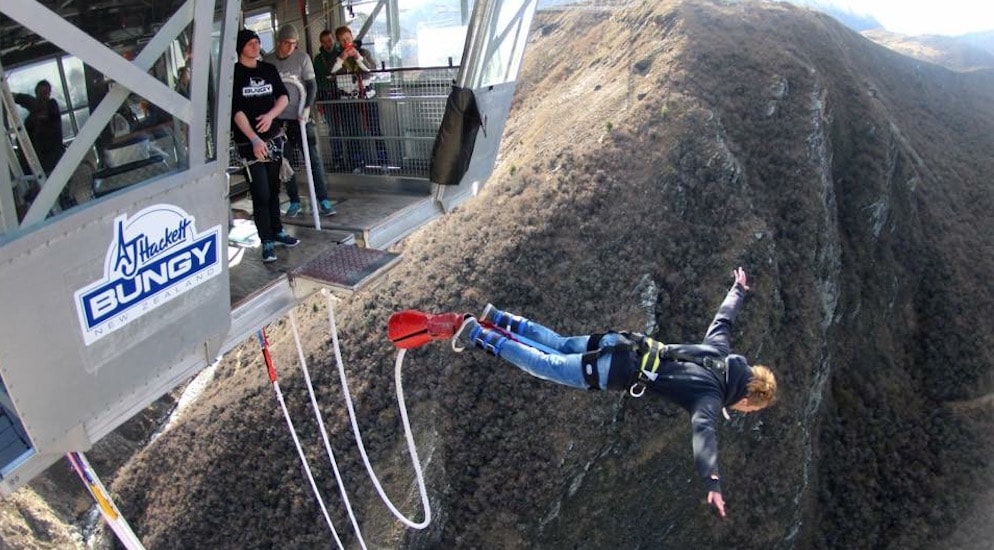 8. Familiarity (to Australia and the UK)

You'll find plenty of Aussies have ended up in New Zealand, to pursue the afore mentione views/people/winters/resorts/wine/sports... so you should feel right at home. We're unsure if this is a good thing or not but, many of our guests from the UK say that New Zealand is kind of like the UK! There is, of course, the shared tongue and it is an island nation of a similar size to the UK... with just as much rain.

Now, how to become ski or snowboard instructor in New Zealand…

Join a ski instructor course with SnowSkool, living in Wanaka, and we'll wager that it will instantly become your favourite place on earth. And the south-facing slopes of Cardrona, where we train, truly offer the world's best skiing in the months of June and October. The trainers assigned to the SnowSkool programme are super-qualified; some are local lads and lasses from NZ, others are hand-picked, winter-lovers from the northern hemisphere – avoiding its summer!

Our ski and snowboard instructor courses in New Zealand, at a glance:

The locals. Seeing the sun rising over Lake Wanaka for the first time. Dropping into Arcadia Chutes. The ‘Big Al’ from Ferburger. The moguls in Last Shot bowl. Visiting AJ Hackett – the home of bungee jumping. Playing on the natural features in Captain’s Basin. Sitting next to Jossi Wells on the chairlift. Jug-fine night at HQ bar. Apartment-hopping at the Belvedere. Kicking back on a sofa at Cinema Paradiso. Standing in the Olympic Superpipe and looking up the walls. Jet-boating on the Shotaway River. The luge in Queenstown. Watching the world’s best at the Burton Open at Cardrona. The views from Cardrona into South Lake Valley. Knowing that this resort has the biggest freestyle park in the southern hemisphere. Just everything about Wanaka… and New Zealand!

More info on the 2021 Ski Instructor Courses in New Zealand

More info on the 2021 Snowboard Instructor Courses in New Zealand