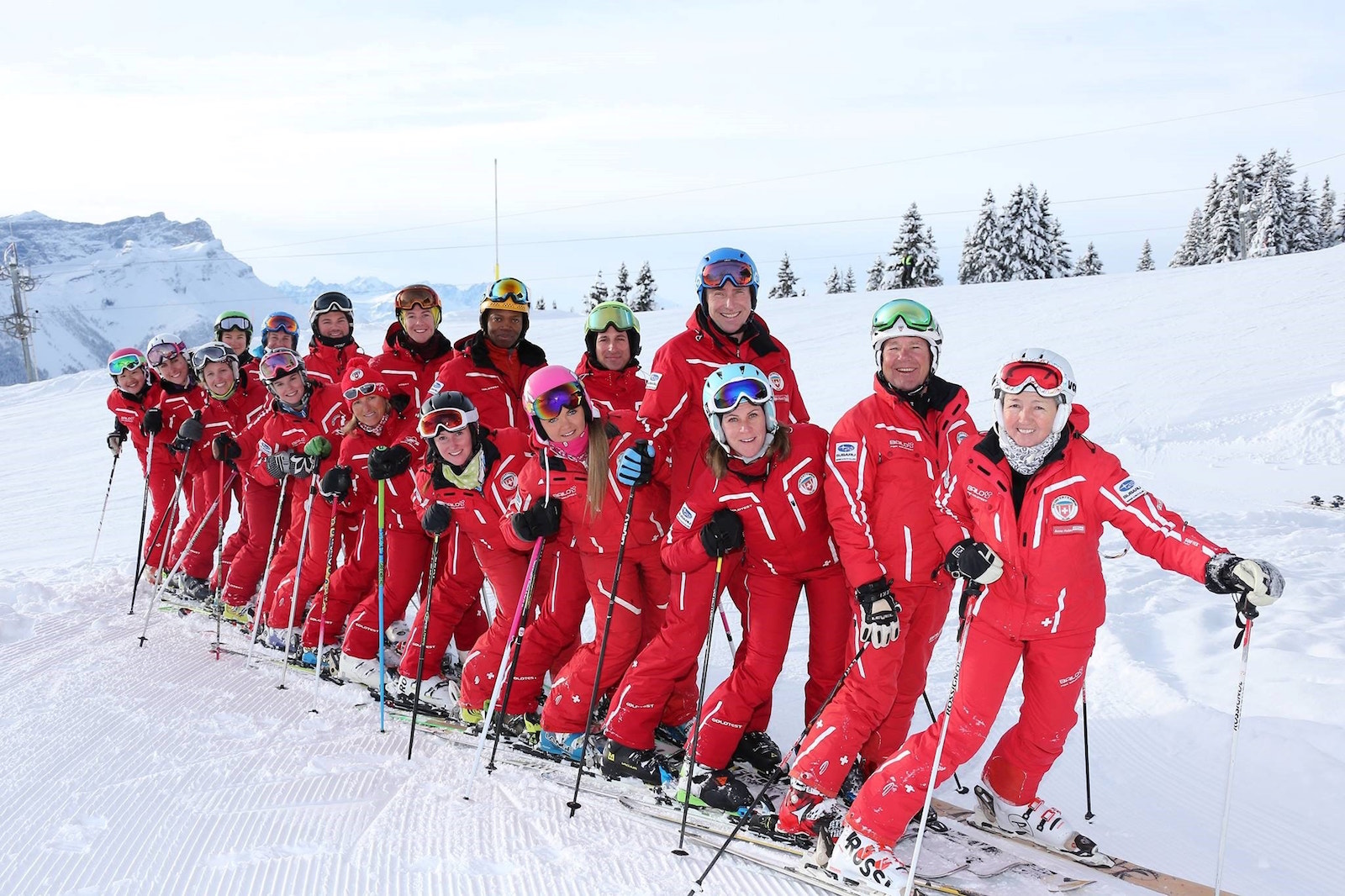 How much does a ski instructor earn? Of all the SnowSkool FAQs, it's our most commonly asked question! It's also totally understandable, considering it takes a lot of time and money to become a ski instructor in the first place. You'll want to know:

Unfortunately, concrete information is thin on the ground! And the answers are not nearly as forthcoming as the questions. This is mainly because there are a ton of variables that can influence ski instructor salaries: the country, the resort, the ski school, your experience and your qualification levels, as well as economic factors affecting the overall demand for lessons and the strength of a currency. All these things mean the answer to the question 'how much do ski instructors get paid' changes every year, and is different between each resort.

Don't worry! We shan't be shying away from answering your (difficult) question on ski instructor salaries. We want to give you as much information, ahead of booking your ski instructor course, as possible. We’ve spoken to a gallimaufry of SnowSkool graduates and ski instructors, around the world, to get you some guideline figures. As previously mentioned, these pesky numbers change every year so we'll endeavour to update this data when the next normal season happens (thank you COVID)... 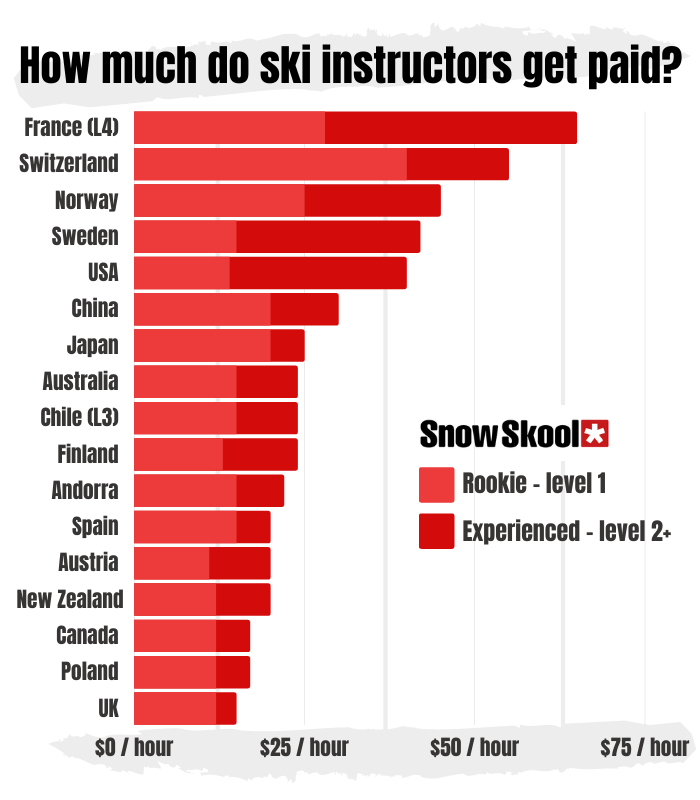 Now France works a bit differently and you need more advanced qualifications. Getting work is tougher than in any other country. But once you have your BASI Level 2 ski instructor qualification and have passed the infamous 'test technique', which is a timed slalom, you can then work at a certified French ski school as a ‘stagiaire’ for four years during which you must continue with instructor qualificationa and become accredited to the French equivalent of BASI Level 4. This is the highest possible instructor level and will enable you to teach independently.

Until you achieve that level, with ‘stagiare’ status your rate of pay will start from about $28 per hour (€25 Euro per hour). And once you have qualified as a BASI Level 4 instructor you can then expect to start on or above $50 per hour (€45 Euro per hour). This can go up to as much as $75/85 (€65/€75) per hour depending on the ski school, experience, clients etc.

The hours of work you can get over the season can be anywhere from 200 - 600 hours depending on the ski school, the snowfall, busy seasons etc.

Reflecting the cost of living in Switzerland, the Swiss ski schools pay generous hourly rates for their employees to teach skiing and snowboarding - and experienced instructors can earn $55-65 per hour. In German-speaking Gstaad, a rookie instructor should expect to earn $40 per hour - and in French-speaking Villars, the starting rate is about $30 per hour (and if you're on our instructor internship programme in Switzerland then this is what you'll earn in those regions). Lots of students from our ski instructor course in France think Switzerland is the best option for them - if you can brush up on your French or German your CV will be super-desireable.

The home of Telemark Skiing offers mountains aplenty for regular skiers and where there are skiers, there are ski resorts and ski instructors. Opportunities do exist in the country for Level 1 and Level 2 equivalent instructors but largely as trainee instructors and most instructors plying their trade will hold an ISIA qualification or above.

In a country that, along with Switzerland, has the highest average wage in Europe (and one of the highest GDPs per capita in the world) it is no surprise that hourly rates for instructors in Norway are generous. But this generosity reflects the cost of living in a country where a loaf of bread will set you back US $5 and a bottle of the local brew more than $10! That all said, the mountains are stunning and the people are lovely so you are sure to have a great season.

The salary for a ski instructor in Sweden sits just below their Norwegian neighbours, and also Denmark. That said, ski instructing is a coveted and respected career in Sweden and the pay reflects that.

As with Norway, there are job opportunities for Level 1 and Level 2 equivalent instructors in Sweden, but most of the top-dogs will hold an ISIA qualification or above.

Ski instructor pay in the USA

Wages seem to differ between the resorts throughout America. On the east coast, the resorts in Vermont pay around $15 for a Level 1 instructor and $20 for a Level 2 instructor. In Aspen, instructors will the same qualifications can earn significantly more, beyond $40 per hour respectively. Further west in the Californian resorts, the rates drop again a little to between $15 and $20. Again, many instructors’ seasons will stand or fall on the number of tips they receive, although it seems that tipping is become less prevalent in recent years.

China's population has boomed over the past decades - and so have the nation’s ski resorts. Rates are variable depending on the resort but can be lucrative considering the low cost of living. Even then, base rates can be above European levels and even nearby Japan. Packages tend to be comprehensive too and can also include accommodation, flights, visa, and daily meals. There’s not usually the requirement to speak Chinese as there are plenty of opportunities for English-speaking Instructors. However, Chinese-language skills would be a boost to your CV.

We've agreed an average in our graph but here's some more on what you can earn in the major resorts, and cities.

However, some Japanese resorts have been known to use a progressive payment system - like in Australia - where instructor pay increases 5% for every 75 hours worked. Typically, starting rates are a bit lower under this arrangement, at $17-$18 per hour.

Most resorts in Australia have a very progressive payment system that rewards long-serving staff members. The starting rates for Level 2 instructors tend to be around $18 per hour. After 75 hours, this will increase to around $24 per hour and then increase dramatically to $45 per hour after 300 hours of logged work.

Chile is an exciting new frontier for ski instructors looking to work in South America. And with a fairly high average salary (especially when compared with North America), great snow, unspoilt slopes, and with the growing interest in emerging ski resorts around the world – it’s becoming an attractive option. Demand is increasing and so are the number of jobs becoming available.

Instructors looking to work here should note that Spanish-language skills are obligatory, though, not just desirable - and at least a L3 qualification is normally needed.

The forward-thinking Finns love flexible work culture - and most ski instructors in Finland work as freelancers and get paid by the hour, with a salary of around 20€ / $22 per hour.

If you get a season instructor post, the minimum salary will be about 15€ per hour. And you'll have a 38-hour working week.

The tiny Catalan-speaking nation in the Pyrenees has plenty of opportunities for ski instructors.  However, like Spain you'll normally need at least a Level 2 qualification to find work. Expect around €20 / $22 per hour. This can increase with higher qualifications.

Bear in mind the French and Spanish flock to Andorra but it's not as popular as the Alps for English speakers, and Brits. If you can speak decent Spanish or French, then you're more likely to get a job and earn more monies.

Spain isn’t the first region you'd think of if someone asked you where ski instructors work. But there are quite a lot of opportunities to instruct in mountain areas like the Pyrenees in the north and the Sierra Nevada in the south, where there are popular ski resorts.

Instructors we’ve spoken to earn well in comparison with most other European countries (except France and Switzerland) but with a much lower cost of living than in the Alps: prices in Spain are up to three times lower than these prestigious resorts in the north.

Becoming qualified to teach isn’t quite as tough as in France but expect a bit more difficulty if you’re not qualified to an ISIA level, such as BASI Level 3 or above.

Austrian resorts pay a monthly salary that is guaranteed regardless of the demand for ski school lessons. Level 2 instructors should expect to earn $2450 per month, before tax, based on working 36 hours per week. That works out at around $20 per hour. However, if you've not qualified via the BASI or Landes systems it can be more difficult to find work as an instructor.

On the whole, Kiwi resorts are not as generous as their counterparts over the Tasman Sea in Australia. Newbies with a Level 1 qualification will not only struggle to get work but even when they do, the hourly rate is likely to be around $12 per hour. Level 2 instructors fare a little better and should expect to earn $18-20 per hour.

One big factor of working in Canada is the North American tipping culture which can double seasonal income! However, a lot of the instructors we spoke to mentioned that tips are becoming harder to come by.

Poland is becoming a popular ski destination due to the relatively low cost of living, easy access from within Europe, and the growing popularity of interesting new destinations that allow skiers and snowboarders to get away from the typically crowded French and Swiss Alps.

Instructors won’t earn as much here as in other European resorts but, with far lower living costs, they may actually have more spending and saving power. With at least a valid BASI Level 2 (or equivalent Level 2) you can apply to any ski/snowboard school in Poland.

In the UK opportunities to work outdoors, on snow, are mainly limited to the resorts in the Scottish Highlands, of which Glenshee is the most extensive with a respectable 36km of pistes. However, elsewhere there are 100s of dry slopes and a rising number of indoor artificial pistes. You'll normally need a Level 2 qualification to work in the outdoor resorts but a Level 1 will suffice on dry slopes and indoors.

Pay doesn't compare too badly with other regions but the conditions are far less predictable than the higher resorts in Europe so hours aren't as guaranteed. Nonetheless, working in the UK can be a fairly comfortable way to gain experience before moving elsewhere.

So, are you ready to become a ski instructor?

So we can glean from this that snowsports instructing is not a fast-track to becoming a millionaire but then if you love skiing or snowboarding, and you could earn enough to live well enough, then why wouldn’t you want to do it over what you’re doing now? And the job sells itself on the lifestyle: living and working in stunning mountain environments, keeping fit, breathing the freshest air and doing what you love and getting paid for it! How can you put a price on that?

Here’s another SnowSkool piece on life as a ski or snowboard instructor.

How to Take Your Snowboarding to the Next Level: Tips & Tricks Previous Entry
How to become an elite Ski Instructor in France Previous Entry