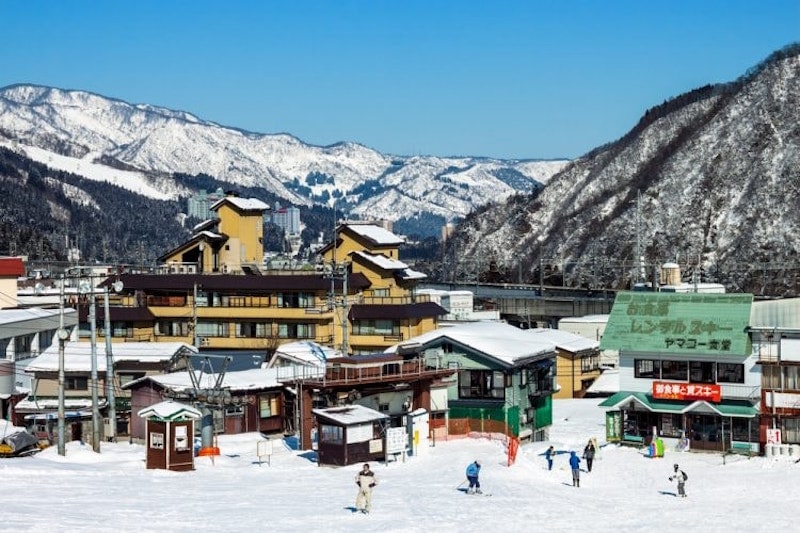 “Japan has the greatest powder in the world!!”

That’s what you hear. People are either painfully aware of the sublime quality of Japanese powder or confused as to why you’d ever want to go to Japan with a snowboard. There’s not much in-between.

But at SnowSkool we know that it’s one of the best places in the world to become a snowboard instructor. Japan is home to some of the most certain quantities of snow in the world; metres can appear overnight. And the quality of the powder is legendary.

Japan’s distinctive culture and food is also in the ski resorts so it’s a fun and unique place to be based. And when it comes to work, demand for instructors is high and jobs are relatively easy to come by. We spoke to ex-SnowSkooler Tom O'Hanlon, a qualified ski instructor in Japan, about what life is like instructing and living in Japan. So, if you want a real insiders insight then have a read!

Still, a job in Japan can seem like an exotic pipedream – interesting in concept but difficult to achieve. However, if you break it down into steps it makes it far easier.

That’s where we come in, here is our step-by-step guide on how to become an instructor in Japan:

Like any other country, to work as an instructor in Japan you’ll need to get qualified. You’ll need no less than a Level 2 snowboard instructor qualification, which will enable you to work in resorts around the world in the ISIA-covered countries (of which Japan is one).

The resorts and countries you can train in are:

When you’ve achieved your Level 2 snowboard qualification - which is no mean feat - you’re onto the next step….

Getting a visa is next. And like many other countries, Japan provides a 1-year working holiday visa. Applicants from 19 countries are welcomed at the time of writing.

There are the prerequisites for the visa though. You must be….

And you must also provide an itinerary for your visit, as well as show you have funds to support yourself and buy a return ticket.

A word of warning: you’ll need to get in quick if you’re from the UK as there are only 1,000 working holiday visas issued per year. There is less pressure if you’re from some of the other countries that are issued an unlimited number of visas, like Australia and New Zealand.

Once approved, you’ll be able to work full-time as an instructor within the 1-year limit of the visa but you should wait until the visa’s approved to apply for jobs.

The process and eligibility for visas isn’t exactly the same for every country. Check the latest information for your country on the website for the Japanese Ministry of Foreign Affairs.

What about longer term? Well, if you want to extend your job in Japan beyond the 1-year working holiday visa, then you can. The route is to to get a ski school to sponsor you to stay. For this you must impress. Ex-SnowSkooler Tom did just this – read his case study on living and working in Myoko, Japan as an instructor .

A note on applying: It’s best that throughout the visa application process you do not say that working as a snowboard instructor is what you’ve already decided to do. If you do this, you could be refused a visa. There’s nothing wrong with working as a snowboard instructor on a working holiday visa but a visa should, in the eyes of the authorities, be about exploring the country and its culture.

With qualification and visa in the bag, now is the time to apply for jobs.

At this stage, it’s really important that you apply to as many Japanese schools and resorts as possible. By doing this you’ll stand a better chance of getting a job. There’s no point being picky (or laid back) when there are limited opportunities.

Realistically, especially with the limited visas available to the UK, there’s a fair chance it might not happen. So, bear in mind the other northern hemisphere countries too. China’s an emerging option – and while it doesn’t have the allure that Japan has, yet, the packages and pay are very attractive. Europe and Canada are more established destinations. See our other blogs on how to become a snowboard instructor in Canada and Europe for more detail (our guide to China is coming soon).

A key concern for instructors considering Japan is language. This isn’t really a problem: the majority of ski school in Japan will recruit English speaking instructors with no Japanese language skills whatsoever. However, the more of the local lingo you can learn then the better impression you’re going to leave your employers and your guests. You might stand a better chance of getting a job and you’ll earn more tips too.

So, it is worth knowing some basics. If you’re a dedicated type then get in early and start practicing your Japanese grammar and vocab with a free app like Duolingo.

Now to the interview!

While interviews can be nerve-racking and painful for some jobs - the interview process to become an instructor in Japan isn’t so bad. A successful phone-interview is generally enough for you to be offered a job. However, if you happen to be in Japan and in a position to show up in person then do it: it can be a great way to get ahead of other candidates and get the job secured.

If you’ve aced the interview, then this is the stage where you’ll receive a job offer. Accept it and you’ll be on the plane to Japan, having made the dream happen!

So, if this is something you really want to do then it is achievable. And a SnowSkool Snowboard Instructor course is the first step you need to take care of.

Here are our courses: